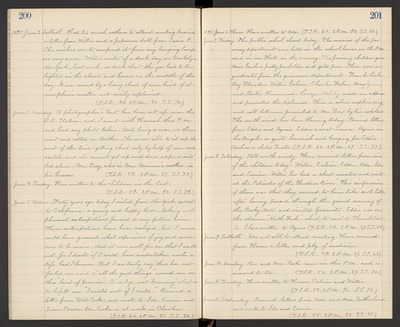 1895. June 2. Sabbath. Had too much asthma to attend meeting. Received a letter from Willie and a Japanese doll from Susie P. She wishes me to suspend it from my hanging lamp in my room. Willie writes of a dark day in Brooklyn, New York, last week, so dark that the gas had to be lighted in the streets and houses in the middle of the day. It was caused by a heavy cloud of some kind of atmospheric matter, not easily explained. (T.S.R. 47. 2 P.M. 80. S.S. 70.)

June 3. Monday. A photographer's tent has been set up near the R.R. Station, and I went with Hannah this P.M. and had my photo taken. And being so near, we then went and called on Mother. She is now able to sit up the most of the time, getting about only by help of cane and crutch, and also cannot get up and down steps, or into bed alone. Mrs. Crey, who is Mrs. Minner's mother, is her nurse. (T.S.R. 53. 2 P.M. 87. S.S. 77.)

June 5. Wednes. Forty years ago today I sailed from New York enroute to California - a young and happy bride - looking with pleasant anticipations forward to my future home. Those anticipations have been realized, but I never could have guessed what experiences of joy and sorrow were to be mine. And it was well for one that I could not, for I doubt if I could have undertaken such a life, had I known. But I can truly say "there has not failed one word of the good things" assured me in this "land of promise". So "on I go, not knowing" what is to befall me. "I would not if I could." Received a letter from Will Cooke, and wrote to Ida, Eunice and Susie Pascoe. Mr. Cooke is at work in Cherokee. (T.S.R. 60. 2 P.M. 91. S.S. 84.)

June 7. Friday. The public school closed today. The exercises of the primary department were held in the school house in the P.M. and in our Hall in the evening. The primary children gave Miss Grubs a pretty penholder and gold pen. There were six graduates from the grammar department. Frank Locke, Roy Flanders, Willie Gehan, Charles Faber. May Young and Bertie Hammond. Lawyer Ashley made an address and presented the diplomas. Then a silver napkin ring and call-bell were presented to Mr. Dow by his scholars. The north wind has been blowing today. Received letters from Eddie and Agnes. Eddie was at Sonora. Agnes in Los Angeles is quite homesick and longing for Eddie. Ambrose re-elected Trustee. (T.S.R. 62. 2 P.M. 87. S.S. 77.)

June 8. Saturday. Still north windy. Have received letters from six of the children today - Willie, Calvin, Eddie, Ada, Ida and Eunice. Willie has had a short vacated and visited the "Palisades of the Hudson River". His impression of them was that they seemed to him like "mole-hills" after having passed through the grand scenery of the Rocky Mts. and visited Yosemite. Eddie was on the steamer "North Fork"- about to sail to Humboldt Co. I have written to Agnes. (T.S.R. 56. 2 P.M. 87. S.S. 68.)