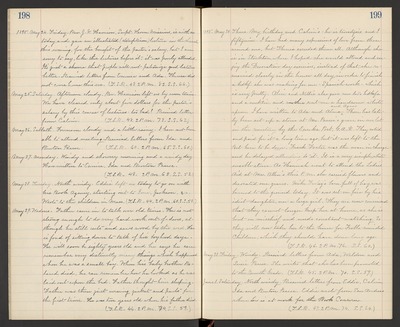 1895. May 24. Friday. Rev. J.K.Harrison, Supt. Home Missions, is with us today, and gave an illustrated (stereopticon) lecture in the church this evening, for the benefit of the pastor's salary, but I am sorry to say, like the lectures before it, it was poorly attended. It's just a shame that people will not patronize good lectures better. Received letters from Eunice and Ada. Theresa did not come home this eve. (T.S.R. 48. 2 P.M. 82. S.S. 66.)

May 25. Saturday. Afternoon cloudy. Rev. Harrison left us by noon train. We have cleared only about five dollars for the pastor's salary by this course of lectures too bad! Received letter from Calvin. (T.S.R. 48. 2 P.M. 73. S.S. 63.)

May 29. Wednes. Father came in to talk over old times. He is not strong enough to do very hard work out-of-doors, although he still into and saws wood by the end. He is fond of sitting down to talk of his boyhood days. He will soon be eighty years old and he says he can remember very distinctly many things which happened when he was a small boy. When his baby brother Roland died, he can remember how he looked as he was laid out upon the bed. Father thought him sleeping. Father was then just wearing jacket and pants for the first time. He was ten years old when his father died. (T.S.R. 44. 2 P.M. 74. S.S. 59.)

1895. May 30. Thurs. My birthday and Calvin's - he is twentysix and I fiftynine. I have had many expressions of love from those around me, but Theresa exceeded them all. Although she is in Stockton, where I hoped she would attend and enjoy the Decoration day exercises, instead of that, she remained closely in the house all day, in order to finish a hdkf. she was making for me - Spanish work - which is very pretty. Alice and Nellie also gave me two hdkfs. and a necktie, and mother sent me a handsome white apron. I have written to Ada and Alma and Agnes. There has lately been set up a stone at Mr. Pascoe's grave in our lot in the cemetery by the Eureka Post, G.A.R. They voted and paid for it a long time ago, but it was left to the Post here to be done. Frank Foster was the man in charge and he delayed attending to it. It is a very simple, white marble stone. As Hannah went to attend the Ladies Aid at Mrs. Allen's this P.M. she carried flowers and decorated our graves. Mike Farley's barn, full of hay, was burned to the ground today. It was set on fire by his idiot daughter, now a large girl. They are now convinced that they cannot longer keep her at home, as she is bent on mischief and needs constant watching. So they will now take her to the home for Feeble-minded children, which they should have done long ago. (T.S.R. 46. 2 P.M. 76. S.S. 60.)