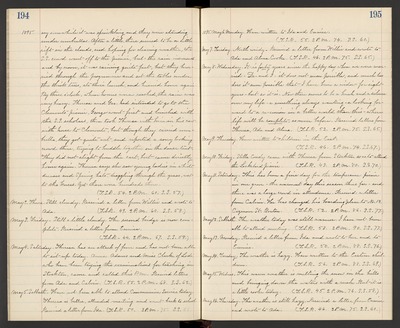 1895. say even while it was sprinkling and they were standing under umbrellas. After a little, there seemed to be a little rift in the clouds, and hoping for clearing weather, the S.S. crowd went off to the picnic, but the rain increased and by noon, it was raining quite fast, but they hurried through the programme and sit the tables under the thick trees, ate their lunch, and hurried home again. By three o'clock, when homes were reached, the rain was very heavy. Theresa and Geo. had intended to go to the Clements picnic. George went first and lunched with the S.S. scholars, then took Theresa with him in his cart with horse to Clements, but though they carried umbrella, they got quite wet and reported a sorry looking crowd there, trying to huddle together in the dance tent. They did not alight from the cart, but came directly home again. Theresa says she saw young ladies in white dresses and spring hats. draggling through the grass, wet to the knees. Yet those were hundreds there. (T.S.R. 54. 2 P.M. 60. S.S. 57.)

May 4. Saturday. Theresa has an attack of fever and has not been able to sit up today. Anna Adams and Miss Clarke of Lodi, who have been trying the examinations for teaching in Stockton, came and called this P.M. Received letters from Ada and Calvin. (T.S.R. 55. 2 P.M. 68. S.S. 62.)

May 8. Wednesday. It is forty years since the happy day when we were married. Dr. and I - it does not sum possible, and much less does it seem possible that I have been a widow for eight years - but so it is. Now there seems to be a hush and a silence over my life - a something always wanting - a looking forward to a re-union in a better world than this - where life will be complete, as never before. Received letters from Theresa, Ada and Alma. (T.S.R. 52. 2 P.M. 75. S.S. 65.)