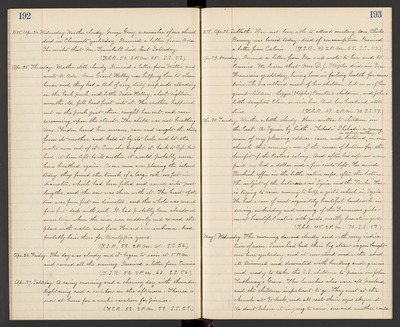 Apr. 25. Thursday. Weather still cloudy. Received a letter from Willie and wrote to Ada. Mrs. Grant Kelley was helping Lou to clean house and they had a tub of very dirty soap seeds standing on the back pouch, and little Sadie Kelley. about eighteen months old, fell head first into it. Her mother happened out on the porch just then, caught her out, and ran screaming upon the street. The child was not breathing. Mrs. Sherdon heard her scream, ran and caught the child from its mother, and held it by its heels and let the water run out of it. Soon she bought it back to life, but had it been left to its mother, it would probably never have breathed again. As our men were plowing the island today, they found the trunk of a large oak, six feet in diameter, which had been filled and sawed into post lengths, and the saw was there with it. The heart of the tree was four feet in diameter, and the whole was covered five feet deep with soil. It had probably been abandoned some time where the river rose suddenly and covered the place with water, and from Howard's remembrance, had probably lain there for twentyfive years. (T.S.R. 52. 2 P.M. 61. S.S. 56.)

Apr. 29. Monday. Received a letter from Ida and wrote to her and to Eunice. We learn that Mrs. D.J. Staples died in San Francisco yesterday, having been in failing health for some time. She has outlined most of her children, but some of her grand-children - Lizzie (Staples) Painter's children, and John's little daughter Elsie, survive her. And her husband still lives. (T.S.R. 47. 2 P.M. 70. S.S. 59.)

Apr. 30 Tuesday. Weather a little cloudy. Have written to children in the East. A Syrian by birth - Shehadi Shehadi - a young man of very pleasing address - came and lectured in native costume in our church this evening - one of the course of lectures for the benefits of the Pastor's salary. And after his expenses were paid we had a dollar and a few cents left. He served Turkish coffee in the little native corps, after the lecture. The subject of the lecture was "Syria and the Turks." He is trying to raise money to help a girl's school in Syria. He had a case of most exquisitely beautiful handwork in sewing, embroidery and weaving, of the Damascus girls - most beautiful native silk goods, mostly decorative goods. (T.S.R. 45. 2 P.M. 70. S.S. 58.)

May 1. Wednesday. The morning dawned cloudy and with every indication of rain. Susie had had their big straw wagon brought over here yesterday, and it now stood under the shed all trimmed and decorated with bunting and greens and ready to take the S.S. children to picnic in John Tutheway's Grove. The lunches also were all packed and the children impatient to go. They met at the church at 9 o'clock, and all cast their eyes skyward. "We don't believe it is going to rain," one and another would