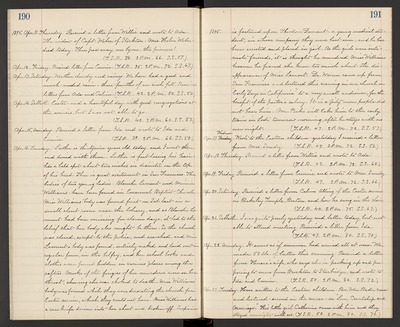 Apr. 16. Tuesday. Luther is thirtynine years old today, and I went there and dined with them. Luther is fast losing his hair- has a bald spot about two inches in diameter on the top of his head. There is great excitement in San Francisco. The bodies of two young ladies - Blanche Lamont and Minnie Williams - have been found in Emanuel Baptist Church. Miss Williams' body was found first on Sat. last in a small closet room near the library, and as Blanche Lamont had been missing for eleven days, it led to the belief that her body also might be there. So the church was closed, except to the police, and searched, and Miss Lamont's body was found, entirely naked and laid out in regular form, in the belfry, and her school books and clothes were found hidden in various places among the rafters. Marks of the fingers of her murderer were on her throat, showing she was choked to death. Miss Williams' body was found while they were decorating the church for Easter service, which they could not have. Miss Williams had a case knife driven into her cheat and broken off. Suspicious

1895. is fastened upon Theodore Durrant - a young medical student, in whose company they were last seen, and he has been arrested and placed in jail. As the girls were intimate friends, it is thought he murdered Miss Williams because he feared she knew too much about the disappearance of Miss Lamont. Dr. Warren came up from San Francisco and lectured this evening in our church on "Early Days in California" to a very small audience, for the benefit of the pastor's salary. It is a pity more people did not hear him. Mr. Perks will take him to the early train in Lodi tomorrow morning, after he stays with us over night. (T.S.R. 47. 2 P.M. 72. S.S. 57.)