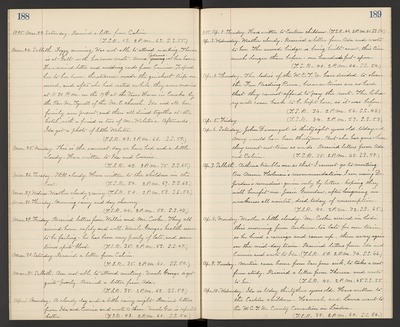 Mar. 24. Sabbath. Foggy morning. Was not able to attend meeting. Theresa is at Galt with her room-mate - Anna Adams at her home. Have received letter and wedding cards from Eunice. To speed her to her lover, the steamer made the quickest trip on record, and after she had rested awhile, they were married at 1:30 P.M. on the 17th at the Vance House in Eureka by the Rev. Mr. Tyrrell of the M.E. church. Ida and all her family were present, and then all dined together at the hotel, with a friend or two of Mr. Webster's. Afterwards, Ida got a photo of little Webster. (T.S.R. 43. 2 P.M. 66. S.S. 59.)

Apr. 6. Saturday. John Demangcot is thirtyeight years old today, and Mary would have been thirtyone. But she has gone where they count not time as we do. Received letters from Ada and Calvin. (T.S.R. 35. 2 P.M. 68. S.S. 58.)

Apr. 7. Sabbath. Asthma troubles me so that I cannot go to meeting. On Annie Holman's recommendation, I am using Dr. Jordan's remedies - given only by letters - hoping they will benefit me. Jessie Greenlaw, after lingering in weakness all winter, died today of consumption. (T.S.R. 40. 2 P.M. 72. S.S. 65.)

Apr. 8. Monday. Weather a little cloudy. Mr. Cooke arrived in Lodi this morning from Auburn, too late for our train, so he hired a carriage and came up, then away again on the mid-day train. Received letters from Ida and Eunice and wrote to Ida. (T.S.R. 50. 2 P.M. 74. S.S. 66.)