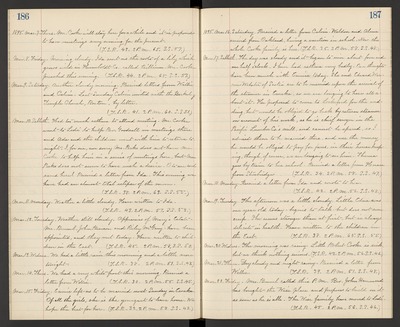 Mar. 10. Sabbath. Had too much asthma to attend meeting. Mr. Cooke went to Lodi to help Rev. Goodsell in meetings there and Ada and the children went with him to return tonight. I, for me, am sorry Mr. Perks does not have Mr. Cooke to help him in a series of meeting here, but Mr. Perks does not seem to have such a desire. O to see souls saved here! Received a letter from Ida. This evening we have had an almost total eclipse of the moon. (T.S.R. 38. 2 P.M. 63. S.S. 55.)

Mar. 17. Sabbath. The day was cloudy and it began to rain about four and one half o'clock. I have had asthma very badly. Our thoughts have been much with Eunice today. She and Edward Warren Webster of Scotia are to be married upon the arrival of the steamer in Eureka, so we are longing to hear all about it. He proposed to come to Lockeford for the wedding, but would be obliged to go back by return steamer on account of his work, as he is chief sawyer in the Pacific Lumber Co.'s mill, and cannot be spared, so I advised them to be married there, and use the money he would be obliged to pay for fares, in their house keeping, though, of course, we are longing to see him. Theresa goes by train to her school. Received a letter from Horace from Sturbridge. (T.S.R. 34. 2 P.M. 58. S.S. 47.)

Mar. 19. Tuesday. The afternoon was little cloudy. Little Edna was one year old today - begins to talk but does not even creep. She seems stronger than at first, but is always delicate in health. Have written to the children in the East. (T.S.R. 38. 2 P.M. 65. S.S. 55.)