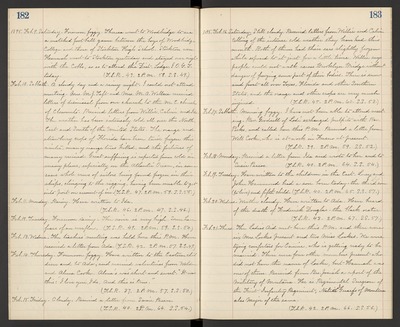 1895. Feb. 9. Saturday. Forenoon foggy. Theresa went to Woodbridge to see a matched football game between the boys of Woodbridge College and those of Stockton High School. Stockton won. Hannah went to Stockton yesterday and stayed overnight with the Cobbs, so as to attend the Dist. Lodge, I.O.G.T. today. (T.S.R. 43. 2 P.M. 58. S.S. 49.)

Feb. 10. Sabbath. A cloudy day and a rainy night. I could not attend meeting. Mrs. M.J. Taft and Mrs. M.A. Wallace received letters of dismissal from our church to the M.E. church of Clements. Received letters from Willie, Calvin and Ida. The weather has been intensely cold all over the North, East and South of the United States. The orange and strawberry crops of Florida have been twice frozen this winter, many orange trees killed, and the fortunes of many ruined. Great suffering is reported from cold in many places, especially on the Atlantic Ocean, in some cases whole crews of sailors being found frozen in their ships, clinging to the rigging, having been unable to get into port on account of ice. (T.S.R. 47. 2 P.M. 59. S.S. 55.)

1895. Feb. 16. Saturday. Still cloudy. Received letters from Wille and Calvin telling of the intense cold weather they have had this month. Both of them had their ears slightly frozen while exposed to it just for a little time. Willie says people could not walk across Brooklyn Bridge without danger of freezing some part of their bodies. There is snow and frost all over Texas, Florida and other Southern States, and the orange and other crops are very much injured. (T.S.R. 45. 2 P.M. 60. S.S. 53.)

Feb. 21. The Ladies Aid met here this P.M. and there were six Mrs. Lockes present and two Miss Lockes. We were trying comforters for Eunice, who is getting ready to be married. There were four other members present who did not have the name of Locke, but Hannah was one of them. Received from Bro. Josiah a report of the Military of Montana. He is Regimental Surgeon of the First Infantry Regiment, National Guards of Montana also Major of the same. (T.S.R. 42. 2 P.M. 66. S.S. 56.)