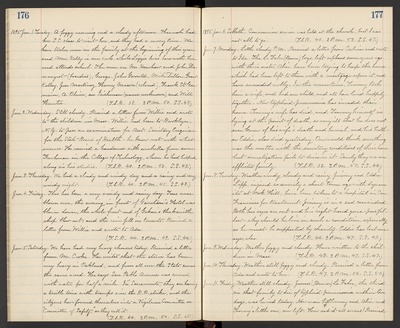 1895. Jan. 1. Tuesday. A foggy morning and a cloudy afternoon. Hannah had her S.S. class to visit her, and they had a merry time. We have twelve men in the family at the beginning of this year and Mrs. Kelly is our cook, while Lizzie lives here with her and attends school. The men are Mr. Henshaw and John Demangcot (boarders), George, John Gerould, Mike Dillon, Grant Kelly, Jose Martinez, Henry Mason (colored), Frank St. Germain, A. Oliver, an Irishman (name unknown) and Will Hunter. (T.S.R. 38. 2 P.M. 50. S.S. 43.)

Jan. 2. Wednesday. Still cloudy. Received a letter from Willie and wrote to the children in Mass. Willie had been to Brooklyn, N.Y. to pass an examination for Asst. Sanitary Engineer for the State Board of Health - he knew not with what success. He received a handsome silk umbrella from some Freshman in the College of Technology, whom he had helped along in his studies. (T.S.R. 40. 2 P.M. 50. S.S. 43.)

Jan. 4. Friday. This has been a very windy and rainy day. Trees were blown over, the awning in front of Ganetson's Hotel was blown down, the whole front end of Gehan's Hacksmith shop blew out, and the rain fell in torrents. Received a letter from Wille and wrote to Ada. (T.S.R. 44. 2 P.M. 49. S.S. 44.)

Jan. 5. Saturday. We have had very heavy showers today. Received a letter from Mr. Cooke. He writes that the storm has been very heavy in Oakland, and from all over the State comes the same word. He says San Pablo Avenue was covered with water for half a mile. In Sacramento, they are having a terrible time with tramps since the R.R. strike, and the citizens have formed themselves into a Vigilance Committee or "Committee of Safety," as they call it. (T.S.R. 44. 2 P.M. 50. S.S. 45.)

Jan. 7. Monday. Little cloudy P.M. Received a letter from Calvin and wrote to Ida. The Le Faber (Brown) boys, left orphans some years ago with their sister Alice, have been trying to keep the home which had been left to them with a mortgage upon it, and have succeeded nobly. In the meantime, Tommy took him a wife, and had one child, and all have lived happily together. Now typhoid-pneumonia has invaded their home. Tommy's wife has died, and Tommy himself is lying at the point of death, so very ill that he does not even know of his wife's death and burial, and his brother Eddie, also died yesterday. One would think something was the matter with the sanitary conditions of their home but investigation fails to discover it. Surely they are an afflicted family. (T.S.R. 32. 2 P.M. 50. S.S. 44.)

Jan. 8. Tuesday. Weather windy, cloudy and rainy. Jimmy and Eddie Lipp, injured so severely a short time ago with dynamite at Mok. Hill, have been taken to a hospital in San Francisco for treatment. Jimmy is in a sad case indeed. Both his eyes are out and his right hand gone - poor fellow - why should he live in such a condition, especially as he must be supported by charity. Eddie has last one eye, also (T.S.R. 44. 2 P.M. 47. S.S. 47.)

Jan. 11. Friday. Weather still cloudy. James (Brown) Le Faber, the third in that family to die of typhoid-pneumonia within ten days, was buried today. Now none but Tommy and Alice and Tommy's little one, are left. How sad it all seems! Received