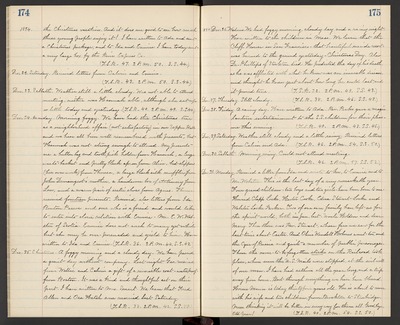 Dec. 24. Monday. Morning foggy. We have had the Christmas tree as a neighborhood affair (not satisfactory) in our Upper Hall and we have all been well remembered with presents, but Hannah was not strong enough to attend. My presents are button bag and toothpick holder from Hannah, a large waste basket and pretty black apron from Alice, bed-slippers (her own work) from Theresa, a large black silk muffler from John Demangcot's mother, a handsome box of stationery from Lou, and a warm pair of arctic shoes from Agnes. Theresa received fourteen presents. Received also letters from Ida, Benton Pascoe and one who is a friend and would like to enter into closer relation with Eunice - Mr. E.W. Webster of Scotia. Eunice does not wish to many yet awhile but she may be over-persuaded and yield to him. Have written to Ida and Eunice. (T.S.R. 36. 2 P.M. 44. S.S. 43.)

Dec. 25. Christmas. A foggy morning and a cloudy day. We have passed a quiet day without company. Last night Geo. received from Willie and Calvin a gift of a reversible coat - water proof from Boston. It was a kind and thoughtful act on their part. I have written to Mrs. Smart. We learn that Fred Allen and Ora Hatch were married last Saturday. (T.S.R. 33. 2 P.M. 42. S.S. 38.)

1894. Dec. 26. Wednes. We had foggy morning, cloudy day and a rainy night. Have written to the children in Mass. We learn that the Cliff House in San Francisco - that beautiful seaside resort - was burned to the ground yesterday - Christmas Day. Also Dr. Phillips of Stockton, died. He predicted the day of his death, as he was afflicted with what he knew was an incurable disease, and thought he knew just about how long he could last, and it proved tree. (T.S.R. 32. 2 P.M. 43. S.S. 43.)

Dec. 31. Monday. Received a letter from Ida and wrote to her, to Eunice and to Mr. Webster. This is the last day of a very remarkable year. Four grand-children - two boys and two girls - have been born to me. Howard Clapp Locke, Hester Cooke, Edna Stewart Cooke and Webster Locke Parker. Two of our own family have left us for the spirit world, both in Jan. last. Uncle Holden and dear Mary. Then there was Rev. Stewart, whose face we saw for the last time about Easter. And Oliver Wendell Holmes went too and the Czar of Russia and quite a number of public personages. Then the never-to-be forgotten strike on the Railroad took place, when even the U.S. Mails were stopped, at the evil will of one man. I have had asthma all the year long, and a trip away from home. But through everything we have been blessed. Horace Marin is today thirty four years old. He is about to move with his wife and two children, from Brockton to Sturbridge, Mass. thinking it will be better in every way for them all. Goodbye, Old Year! (T.S.R. 40. 2 P.M. 54. S.S. 50.)