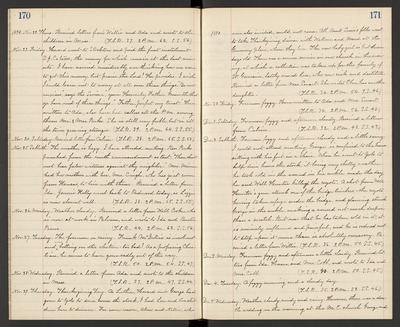 Nov. 23. Friday. Howard went to Stockton and paid the first instalment S.J. Co. taxes, the money for which came in at the last minute. I have worried considerably over thinking how we were to get this money, but praise the Lord! He provides. I wish I could learn not to worry at all over these things. "Be not anxious," says the Saviour, "your Heavenly Father knoweth that ye have need of these things." Father, perfect my trust." Have written to Ada, also have had callers all the P.M. among them Mr. & Mrs. Perks. She is still very feeble, but is all the time growing stronger. (T.S.R. 39. 2 P.M. 64. S.S. 55.)

Nov. 25. Sabbath. The weather is hazy. I have attended meeting. Rev. Perks preached from the ninth commandment as text, "Thou shall not bear false witness against thy neighbor." Mrs. Mimer had her mother with her, Mrs. Creigh, who has just come from Kansas, to live with them. Received a letter from Ida. Jennie Kelly went back to Redwood today, as Lizzie is now almost well. (T.S.R. 38. 2 P.M. 65. S.S. 55.)

Nov. 29. Thursday. Thanksgiving Day. As Luther, Howard and George had gone to Yolo to drive house the stock, I had Lou and her children here to dinner. For some reason, Alice and Nellie, who

1894. were also invited, could not come. All Aunt Susie's folks went to take Thanksgiving dinner with Wallace and Mand at the Grunsey place, where they live. The new baby girl is but eleven days old. There was a union service in our church in the evening, at which a collection was taken up for the family of St. Germain, lately moved here, who are sick and destitute. Received a letter from Mrs. Smart. She writes Eben has another daughter. (T.S.R. 34. 2 P.M. 54. S.S. 46.)

Dec. 2. Sabbath. Forenoon foggy and afternoon cloudy and a little rainy. I could not attend meeting. George is confined to the house sitting with his foot in a chair. When he went to Yolo to help drive home the stock, it being very chilly weather, he took cold in the wound in his ankle made the day he and Will Hunter killed the coyote. A shot from Will Hunter's gun stuck one of the bridge timbers - the coyote having taken refuge under the bridge, and glancing, struck George in the ankle, making a wound not much deeper than a scratch. But now that he has taken cold in it, it is seriously inflamed and painful, he is ordered not to step upon it more than is absolutely necessary. Received a letter from Willie. (T.S.R. 36. 2 P.M. 50. S.S. 45.)

Dec. 5. Wednesday. Weather cloudy, windy and rainy. However, there was a double wedding in the morning at the M.E. church. George and