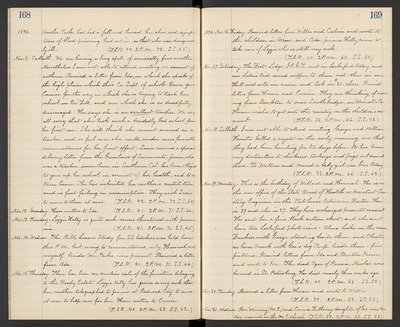 Nov. 11. Sabbath. We are having a long spell of unusually fine weather. Nevertheless I am not able to attend meeting on account of asthma. Received a letter from Ida, in which she speaks of the high praise which their Co. Supt. of schools- Brown gives Eunice for the way in which she is trying to teach her school in Rio Dell, and over which she is so dreadfully discouraged. He says she is an excellent teacher. We are all sorry that she took such a decidedly bad school for her first one. She will think she cannot succeed as a teacher, and we feel sure she could, render more favorable circumstances for her first effort. Susie received a special delivery letter from the Greenlaws of Sacramento. Jessie, who was a teacher somewhere in Southern Cal. has been obliged to give up her school on account of her health, and to return home. She has inherited her mother's constitution and is fast-failing in consumption. They wish Susie to come to them at once. (T.S.R. 42. 2 P.M. 72. S.S. 68.)

Nov. 15. Thursday. There has been an auction sale of the furniture belonging to the Boody Estate. Lizzie Kelly has grown so very sick that her mother telegraphed to Jennie at Redwood City to come at once to help care for her. Have written to Eunice. (T.S.R. 40. 2 P.M. 68. S.S. 62.)

Nov. 17. Saturday. The Dist. Lodge. I.O.G.T. met in Lockeford today and our Ladies Aid served supper to them and others in our Hall and sold ice cream and took in $30. clear. Received letters from Horace and Eunice. They are thinking of moving from Brockton to near Southbridge, in Worcester Co. Horace wishes to get into the country on the children's account. (T.S.R. 38. 2 P.M. 66. S.S. 62.)

Nov. 18. Sabbath. I was not able to attend meeting. George and William Hunter killed a coyote in the early morning one that they had been hunting for two days before. It has been very destructive to chickens, turkeys and pigs out around there. To Wallace and Maud a baby girl was born today. (T.S.R. 38. 2 P.M. 66. S.S. 62.)

Nov. 19. Monday. This is the birthday of Willard and Hannah. He is in the new office of the State Board of Health as Assistant Sanitary Engineer in the State house Extension, Boston. He is 29 and she is 27. They have exchanged presents as usual. He sent her a fine, black sateen skirt, and she sent him two Lockeford photo views - Alma Locke on the more Duchess with George standing beside them, and Chester on horse Monk with Geo.'s dog "Purp" beside them - fine pictures. Received letters from Ida and Benton Pascoe and wrote to Ida. The dead Czar of Russia, Nicolas, was buried in St. Petersburg. He died nearly three weeks ago. (T.S.R. 40. 2 P.M. 68. S.S. 58.)