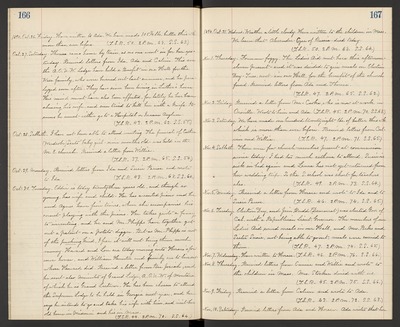 Oct. 27. Saturday. Theresa came home by train, as no one went in for her yesterday. Received letters from Ida, Ada, and Calvin. This eve the A.O.U.W. Lodge have held a Benefit in our Hall for the Wise family, who were burned out last summer, and he paralyzed soon after. They have since been living in Luther's house. His mind must have also been affected, for lately he has been abusing his wife, and even tired to kill her with a knife. It seems he must either go to a Hospital or Insane Asylum. (T.S.R. 43. 2 P.M. 62. S.S. 55.)

Oct. 30. Tuesday. Eddie is today twentythree years old, and though so so young, has wife and child. He has a rented piano and he and Agnes have fine times, when she accompanies his [?] playing with the piano. He takes quite a fancy to inventing, and he and Mr. Phipps have together got out a patient on a potato-digger. But as Mr. Phipps is not of the pushing kind, I fear it well not bring them much money. Howard and Lou are today moving into Horace's former house, and Williams Hunter and family are to live out where Howard did. Received a letter from Bro. Josiah, and he sent also Minutes of Grand Lodge, A.O.U.W. of Montana of which he is Grand Lecturer. He has been chosen to attend the Supreme Lodge to be held in Georgia next year, and he says he intends to go to take his wife with him, and visit her old home in Missouri and his in Mass. (T.S.R. 44. 2 P.M. 70. S.S. 64.)

Nov. 1. Thursday. Forenoon foggy. The Ladies Aid met here this afternoon- eleven present - and it was decided to give meals on Election Day- Tues. next - in our Hall, for the benefits of the church fund. Received letter from Ada and Theresa. (T.S.R. 47. 2 P.M. 65. S.S. 62.)

Nov. 4. Sabbath. There were few church members present at communion service today. I had too much asthma to attend. Susie is sick in bed again and Laura has not yet returned from her wedding trip. So the S. school was short for teachers also. (T.S.R. 49. 2 P.M. 73. S.S. 64.)

Nov. 10. Saturday. Received letters from Ada and Horace. Ada writes that her