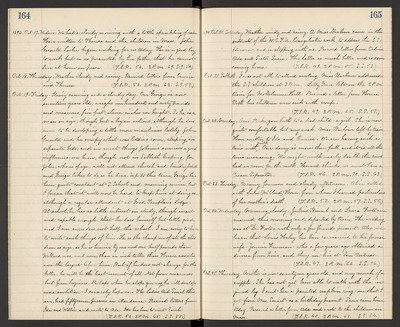 1894. Oct. 17. Wednes. We had a cloudy morning with a little sprinkling of rain. Have written to Theresa and the children in Mass. John Gerould Locke began working for us today. He is a good boy to work but is so persecuted by his father that he cannot live at home in peace. (T.S.R. 54. 2 P.M. 69. S.S.54.)

Oct. 19. Friday. Rainy morning and a cloudy day. Our George is now seventeen years old, weighs one hundred and sixty pounds and measures five feet, eleven inches in height. So he is a man in size, though but a boy in actions, although he does sum to be developing a little more manliness lately. John Gerould and he occupy what was Eddie's room, sleeping in separate beds, and in most things Johnnie exercises a good influence over him, though not in Sabbath keeping, for John, who is of age, will not attend church and Sunday School and George likes to do as he does. Up to this time, George has been quite constant at S. School and morning service, but I foresee that it will now be hard to keep him at doing so, although a regular attendant at Good Templar's Lodge. At school, he has so little interest in study, though smart and capable enough, that he does himself but little good, and I am sure does not help the school. I am sorry to have to write such things of him. He is the champion of all the children is size, as he is heavier by one and one-half pounds than Willard was, and more than an inch taller than Horace was, who were the largest before him. But if he does not change for the better, he will be the "least account" of all. Not from meanness but from laziness. Perhaps when he stops growing, he will develop more ambition - I sincerely hope so. - The Ladies Aid Social this eve, had fiftyseven persons in attendance. Received letters from Ida and Willie and wrote to Ada. Ida has been to visit Sarah. (T.S.R. 52. 2 P.M. 65. S.S. 55.)

Oct. 22. Monday. Mrs. Perks gave birth to a dead child - a girl. She is now quite comfortable, but very weak. Miss Barbour left by train. Have written to Ida and Eunice. We are having such, a time with milk. Our dairy is more than full, and it is all the time increasing. We might milk nearly double the cows had we room for the milk. Howard thinks we must have a Cream Separator. (T.S.R. 46. 2 P.M. 70. S.S. 63.)

Oct. 24. Wednesday. Morning cloudy. Julius Bruml and Laura Foote were married this morning and departed by train. The wedding was at Dr. Foote's with only a few friends present. Also we learn that Louis Haley has been re-married to his former wife - Jennie Freeman. who a few years ago obtained a divorce from him, and they now live at San Andreas. (T.S.R. 47. 2 P.M. 62. S.S. 56.)

Oct. 25. Thursday. Mother is now seventy one years old, and very much of a cripple. She has not yet been able to walk with the injured leg. I sent her a painted napkin ring - one that I got from Mrs. Smart - as a birthday present. Susie came home today. Received a letter from Ada and wrote to the children in Mass. (T.S.R. 45. 2 P.M. 68. S.S. 54.)