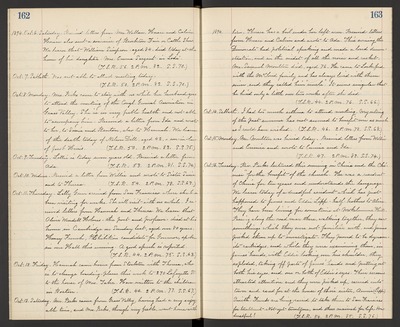 Oct. 8. Monday. Mrs. Perks came to stay with us while her husband goes to attend the meeting of the Congl. General Association in Grass Valley. She is in very feeble health and not able to accompany him. Received a letter from Ida and wrote to her, to Susie and Benton, also to Hannah. We learn of the death today of Nelson Dill, aged 42, a son-in-law of Jacob Harris. (T.S.R. 50. 2 P.M. 83. S.S. 75.)

Oct. 11. Thursday. Lilly Grive arrived from San Francisco where she has been visiting for weeks. She will visit with us awhile. I received letters from Hannah and Theresa. We learn that Oliver Wendell Holmes - the poet and professor - died at his home in Cambridge on Sunday last, aged over 80 year. Henry French, Prohibition candidate for Governor, spoke in our Hall this evening. A good speech is reported. (T.S.R. 44. 2 P.M. 75. S.S. 63.)

Oct. 13. Saturday. Mr. Perks came from Grass Valley, having had a very enjoyable time, and Mrs. Perks, though very feeble, went home with

1894. him. Theresa has a boil under her left arm. Received letters from Horace and Calvin and wrote to Ada. This evening, the Democrats had political speaking and made a loud demonstration, and in the midst of all the noise and racket, Mr. Samuel Moulton died, aged 76. He came to Lockeford with the McCloud family and has always lived with them since, and they called him "uncle." It seems singular that he lived only a little over two weeks after she died. (T.S.R. 44. 2 P.M. 76. S.S. 66.)

Oct. 16. Tuesday. Rev. Perks lectured this evening on "China and the Chinese" for the benefit of the church. He was a resident of China for ten years and understands the language. We learn today of a dreadful accident which has just happened to James and Eddie Lipp - half-brothers to Alice. They have been living for sometime at Mokelumne Hill. Passing along the road near there, walking together, they saw somethings which they were not familiar with, and James picked them up to investigate. They proved to be dynamite cartridges, and while they were examining them, in James' hands, with Eddie looking over his shoulder, they exploded, taking off parts of James' hands and putting out both his eyes, and one or both of Eddie's eyes. Their screams attracted attention and they were picked up, carried into town and cared for at the house of their sister, Annie (Lipp) Smith. Funds are being raised to take them to San Francisco for treatment. Not yet twenty one, and thus maimed for life. How dreadful! (T.S.R. 54. 2 P.M. 85. S.S. 76.)