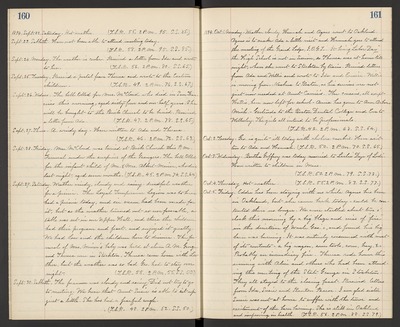 Sept. 29. Saturday. Weather windy, cloudy and rainy - dreadful weather for a picnic. The Loyal Temperance Legion was to have had a picnic today, and ice cream had been made for it, but as the weather turned out so unfavorable, a table was set in our Upper Hall, and there the children had their program and feast, and enjoyed it greatly. We had Lou and the children here to dinner. The funeral of Mrs. Miner's baby was held at eleven A.M. George and Theresa were in Stockton. Theresa came home with Luther, but the weather was so bad Geo. Had to stay over night. (T.S.R. 55. 2 P.M. 55. S.S. 50.)

1894. Oct. 1. Monday. Weather cloudy. Hannah and Agnes went to Oakland. Agnes is to make Ada a little visit and Hannah goes to attend the meeting of the Grand Lodge, I.O.G.T. It being "Labor Day" the High School is not in Session, so Theresa was at home till night, when she went to Stockton by train. Received letters from Ada and Willie and wrote to Ida and Eunice. Willie is moving from Nashua to Boston, as his services are not just now needed at Aunt Carrie's. The cousins, all except Hattie, have now left for school - Anna has gone to Ann Arbor, Mich. - Gertrude to the Boston Dental College and Eva to Wellesley. The girls all intend to be professionals. (T.S.R. 42. 2 P.M. 68. S.S. 64.)

Oct. 5. Friday. Eddie has been staying with us while Agnes has been in Oakland, but she came back today - could be contented there no longer. We were startled about two o'clock this morning by a big blaze and cries of "fire" in the direction of Uncle Geo.'s, and found his big barn was burning. It was entirely consumed with most of its contents - a big wagon, some tools, corn, hay, x.c. Probably an incendiary fire. Theresa rode home this evening with Alice and others who had been attending the meeting of the State Grange in Stockton. They all stayed to the closing feast. Received letters from Ida, Susie and Benton Pascoe. I am glad sister Susie was not at home to suffer with the turn and excitement of the barn burning. She is still in Oakland and improving in health. (T.S.R. 56. 2 P.M. 88. S.S. 79.)