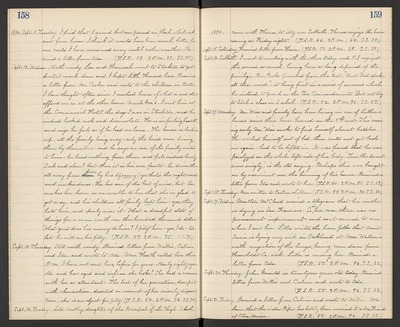 Sept. 12. Wednes. North windy. Lou and Hannah went to Stockton to get dentist work done and I kept little Howard here. Received a letter from Mr. Cooke and wrote to the children in Boston. I have thought often since I reached home of what a sad state affairs are in at the other house. Uncle Geo.'s. I met him at the Commercial Hotel the day I was in Stockton, and he indeed looked sick and disconsolate. He is in failing health and says he feels as if he had no home. The house is locked up, all the family being away - only the hired men living there by themselves - and he says no one of the family writes to him - he hears nothing from them, and feels indeed lonely. Sick and alone! but then it is his own fault - he drives them all away from him by his tyranny (yes, that's the right word) and unkindness. He has one of the best of wives, but he makes her home so miserable to her that she is glad to get away, and his children all fairly hate him - yes, they hate him, and openly avow it. What a dreadful state of things for a man worth over three hundred thousand dollars! What good does his money do him? I pity him - yes, I do - too late he will see his folly. (T.S.R. 57. 2 P.M. 75. S.S. 71.)

Sept. 13. Thursday. Still north windy. Received letters from Willie, Calvin and Ida, and wrote to Ada. Mrs. Heath called here this P.M. I have not met her before for year. Nearly eaighty yrs. old, and how aged and infirm she looks! She had a woman with her as attendant. The last of her generation, decrepit with rheumatism, deserted on account of her miserly disposition, she is an object for pity. (T.S.R. 50. 2 P.M. 76. S.S. 70.)

Sept. 14. Friday. Lola Mobley, daughter of the Principal of the High School,

Sept. 16. Sabbath. I went to meeting with the others today, and O I enjoyed the service so much, having been so long deprived of the privilege. Rev. Perks preached from the text, "And God spoke all these words" - it being first in a series of sermons which he intends to preach on the Ten Commandments. Did not try to teach a class in S. school. (T.S.R. 52. 2 P.M. 90. S.S. 83.)

Sept. 17. Monday. Mr. Wise and family have been living in one of Luther's houses since their house burned on the 5th inst. This morning early Mr. Wise awoke to find himself almost helpless. He worked himself out of bed, then could not get back in again - had to be lifted in. It was found that he was paralyzed on the whole left side of his body. "Troubles do not come singly," is the old saying. Perhaps this was brought on by worriment over the burning of his house. Received a letter from Ida and wrote to her. (T.S.R. 60. 2 P.M. 91. S.S. 83.)

Sept. 19. Wednes. Moulton McCloud received a telegram that his mother is dying in San Francisco. So in her case, there was no permanent improvement, and so it seemed to me when I saw her. Lilla writes the home folks that Aunt Susie is lying very sick in Oakland at Mrs. Wallace's with congestion of the lungs, having come down from Humboldt Co. sick. Lilla is nursing her. Received a letter from Ada. (T.S.R. 55. 2 P.M. 92. S.S. 82.)