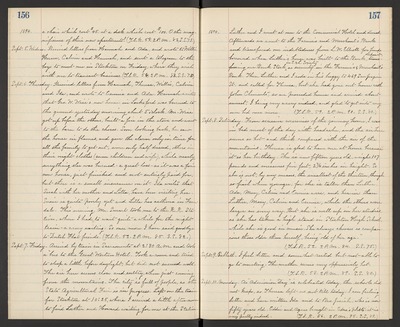 Sept. 5. Wednes. Received letters from Hannah and Ada, and wrote to Willie, Horace, Calvin and Hannah, and sent a telegram to the boys to meet me in Stockton on Friday, where they wish with me to transact business. (T.S.R. 54. 2 P.M. 83. S.S. 70)

Sept. 6. Thursday. Received letters from Hannah, Theresa, Willie, Calvin and Ida, and wrote to Eunice and Ada. Hannah writes that Geo. W. Wise's new house in Lockeford was burned to the ground yesterday morning about 5 o'clock. Mr. Wise got up before the others, built a fire in the stove and went to the barn to do the chores. Soon looking back, he saw the house in flames, and gave the alarm only in time for all the family to get out, some only half dressed, others in their night clothes (seven children and wife), while nearly everything else was burned - a great loss - as it was a fine new house, just finished and not entirely paid for, but there is a small insurance on it. Ida writes that Sarah with her mother and Lilla, have been visiting her. Susie is quite poorly yet and Lilla has asthma in Ferndale. This evening, Mr. Smart took me to the R.R. Station, where I had to wait quite a while for the night train - a weary waiting. So once more I have said goodbye to Dutch Flat friends. (T.S.R. 52. 2 P.M. 85. S.S. 82.)

Sept. 7. Friday. Arrived by train in Sacramento at 2:30 A.M. and took a bus to the Great Western Hotel. Took a room and tried to sleep a little before daylight, but did not succeed well. The air here seems close and sultry, when just coming from the mountains. The city is full of people, as the State Agricultural Fair is in progress. Left on the train for Stockton at 10:25, where I arrived a little after noon to find Luther and Howard waiting for me at the Station.

1894. Luther and I went at once to the Commercial Hotel and dined. Afterwards we went to the Farmer's and Merchant's Bank and transferred our indebtedness from L.W. Elliott for funds borrowed when Luther's house was built to the Bank, depositing our Bank Stock in S. & L. Society as security in the Farmer's & Merchant's Bank. Then Luther and I rode in his buggy to 469 San Joaquin St. and called for Theresa, but she had gone out home with John Clements, so we proceeded home and arrived about sunset, I being very weary indeed, and glad to get into my own bed once more. (T.S.R. 59. 2 P.M. 90. S.S. 80.)

Sept. 8. Saturday. From excessive weariness of the journey home, I was in bed most of the day with headache, and the air here seems so hot and thick compared with the air of the mountains. Theresa is glad to have me at home because it is her birthday. She is now fifteen years old, weighs 107 pounds and measures five feet, 2 3/4 inches in height. So she is not, by any means, the smallest of the thirteen, though so frail when younger, for she is taller than Luther, Ada, Mary, Calvin and Eunice were, and heavier than Luther, Mary, Calvin and Eunice, while the others were larger in every way. But she is well up in her studies, as she has taken a high stand in Stockton High School, while she is good in music. She always chooses as companions those older than herself, being "old of her age." (T.S.R. 52. 2 P.M. 84. S.S. 75.)

Sept. 10. Monday. As "Admission Day" is celebrated today, the schools did not keep, so Theresa left us not till today. I am feeling better and have written Ida and to Bro. Josiah, who is now fifty years old. Eddie and Agnes brought in Edna's photo. It is very pretty indeed. (T.S.R. 56. 2 P.M. 95. S.S. 89.)