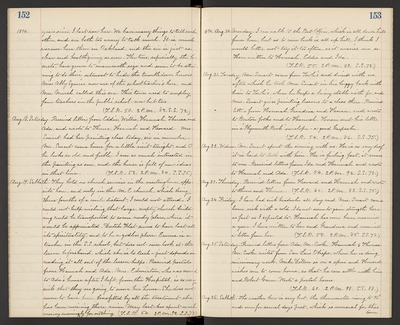 1894. years since I last saw her. We have many things to tell each other, and are both too weary to talk much. It is much warmer here than in Oakland, and the air is just as clear and health giving as ever. The trees, especially the locusts, have grown to mammoth size, and seem to be striving to do their utmost to hide the tumble down houses. Miss Abby Squires, now one of the school teacher's here, and Mrs. Marsh called this eve. This town used to employ four teachers in the public school - now but two. (T.S.R. 50. 2 P.M. 82. S.S. 72.)

Aug. 18. Saturday. Received letters from Eddie, Willie, Hannah, Theresa and Ada, and wrote to Theresa, Hannah and Howard. Mrs. Smart had her painting class today, six in number. Mr. Smart came home for a little visit tonight, and O he looks so old and feeble. I am as much interested in the painting as ever, and the house is full of new ideas in that line. (T.S.R. 52. 2 P.M. 84. S.S. 75.)

Aug. 19. Sabbath. They hold no church services in the meeting house opposite here, and only in the M.E. church, which being three fourths of a mile distant, I could not attend. I could not help wishing that large, empty church building could be transported to some needy place, where it would be appreciated. Dutch Flat seems to have lost all its spirituality, and to be a godless place. Emma is a teacher in the S.S. school, but does not once look at the lesson before hand, which she is to teach - just depends on reading it all out of the lesson - helps. Received postals from Hannah and Ada. Mrs. Edmiston, who was moved to Ada's house after I left, from the Hospital, is so very sick that they are going to move her home. She does not sum to have been benefitted by all the treatment she has been receiving there since May last - has spent much money seemingly for nothing. (T.S.R. 54. 2 P.M. 92. S.S. 77.)

Aug. 21. Tuesday. Mr. Smart came from Towle's and dined with us, after which he took Mrs. Smart in his buggy back with him to Towle's, where he keeps and livery stable with Jo, and Mrs. Smart gives painting lessons to a class there. Received letters from Hannah, Grandma and Horace, and wrote to Boston folks and to Hannah. Horace sent his letter in a "Plymouth Rock" envelope - a good keepsake. (T.S.R. 54. 2 P.M. 86. S.S. 75.)

Aug. 25. Saturday. Received letters from Ada, Mr. Cooke, Hannah & Theresa. Mr. Cooke writes from San Luis Obispo, where he is doing missionary work. Mike Dillon is on a spree and Howard wishes me to come home, so that he can settle with him and Robert Green. Wrote a postal home. (T.S.R. 60. 2 P.M. 98. S.S. 88.)

Aug. 26. Sabbath. The weather here is very hot, the thermometer rising to 96- and over for several days past, which is unusual for this town.