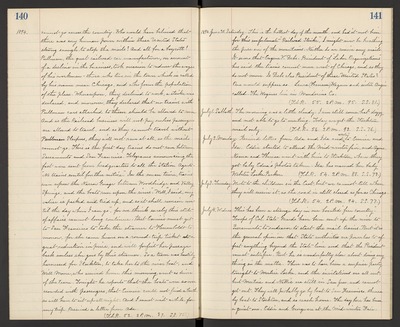 1894. cannot go across the country. Who would have believed that there was any human power within these United States strong enough to stop the mails? And all for a boycott! Pullman, the great railroad car manufacturer, on account of a decline in the business, took occasion to reduce the wages of his workmen - those who live in the town which is called by his name near Chicago, and who form the population of the place. Whereupon, they declined to work, a strike was declared, and more over, they declared that no trains with Pullman cars attached to them should be allowed to run. And as the Railroad business will not pay unless passengers are allowed to travel, and as they cannot travel without Pullman Sleepers, they will not run at all, so the mails cannot go. This is the first day trains do no run between Sacramento and San Francisco. Telegrams announcing the fact were sent from headquarters to all the Station Agents. "No trains until further notice." In the mean time, trains run upon the Narrow Garage between Woodbridge and Valley Springs, and the boats run upon the rivers, "Well," I said, my valise is packed and tied up, and so it shall remain until the day when I can go," for we think surely this state of affairs cannot long continue. Bret Eunice must get to San Francisco to take the steamer to Humboldt tomorrow, for she came home on a round-trip ticket at a great reduction in price, and will forfeit her passage back unless she goes by this steamer. So a team was hastily harnessed for Stockton, to take her to the river boat, and Will Moore, who arrived home this morning, went as driver of the team. Tonight he reports that the boats were so over crowded with passengers, that Eunice could not find a berth, so will have to sit up all night. And I must wait a while for my trip. Received a letter from Ada. (T.S.R. 52. 2 P.M. 89. S.S. 75.)

1894. June 30. Saturday. This is the hottest day of the month, and had it not been for this unfortunate "Railroad Strike," I might now be breathing the pure air of the mountains. Neither do we receive any mails. It seems that Eugene V. Debs. President of "Labor Organizations" has said the trains cannot move west of Chicago, and so they do not move. It Debs also President of these United State? One would suppose so . Laura (Hansen) Wagner and sister Angie called. The Wagners Live in Mendocino Co. (T.S.R. 55. 2 P.M. 95. S.S. 81.)

July 2. Monday. Received letters from Ada and Ida and wrote to Eunice and Ida. Eddie started to attend the Mid-Winter fair, and Agnes, Nema and Theresa went with him to Stockton, where they got baby Edna's photos taken. Ida has named her baby Webster Locke Parker. (T.S.R. 54. 2 P.M. 88. S.S. 73.)

July 4. Wednes. This has been a strange day in our boasted "free country". Troops of Cal. State Guards have been sent up the river to Sacramento, to endeavor to start the mail trains. But it is the general opinion that State authorities are powerless to effect anything beyond the State line and that the President must interfere. But he is wonderfully slow about doing any thing in the matter. There was to have been a surprise party tonight to Mertice Locke, and the invitations are all out, but Mertice and Nettie are still in San Jose, and cannot get out. They will probably go by boat to San Francisco, thence by boat to Stockton, and so reach home. The day here has been a quiet one. Eddie and George are at the Mid-winter Fair.