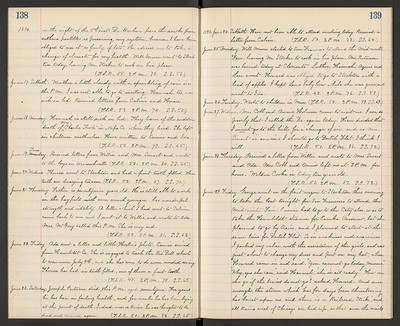 1894. on the night of the 5th inst. Dr. Barbour fears the smoke from asthma pastilles is poisoning my system, because I have been obliged to use it so freely of late. He advises me to take a change of climate for my health. Will Moore went to Stockton today, leaving Mr. Stocker to cook in his place. (T.S.R. 55. 2 P.M. 78. S.S. 58.)

June 21. Thursday. Father is seventynine years old. He is still able to work in the hayfield with men much younger - has wonderful strength and vitality. A letter which I had sent to Calvin came back to me and I sent it to Willie, and wrote to Ada. Mrs. McGary called this P.M. She is very sad. (T.S.R. 52. 2 P.M. 81. S.S. 63.)

June 22. Friday. Ada sent a letter and little Hester's photo. Eunice arrived from Humboldt Co. She is engaged to teach the Rio Dell school to commence July 9th, and she has come to do some needed sewing. Theresa has had six teeth filled, one of them a front tooth. (T.S.R. 48. 2 P.M. 79. S.S. 65.)

June 25. Monday. Will Moore started to San Francisco to attend the Mid-winter Fair, leaving Mr. Stocker to cook in his place. Mr. Putnam was buried today at Clements. Luther, Hannah, Agnes and Lou went. Howard was obliged to go to Stockton with a load of apples. I kept Lou's baby here while she was gone, and wrote to Ida. (T.S.R. 48. 2 P.M. 76. S.S. 58.)

June 29. Friday. George went on the fruit wagon to Stockton this morning to take the boat tonight for San Francisco to attend the Mid-winter Fair. Eunice had to go to the City also, so as to take the Humboldt steamer for Eureka tomorrow, but she planned to go by train, and I planned to start at the same time for Dutch Flat. So in weakness and weariness I packed my valise, with the assistance of the girls, and was just about to change my dress and put on my hat, when Howard came in and said, "You cannot go today, Mamma." "Why, yes she can," said Hannah, "she is all ready." "How can she go if the trains do not go?" asked Howard. And sure enough, the storm which has for days been threatening has burst upon us, and there is a "Railroad Strike," and all trains west of Chicago are tied up, so that even the mails