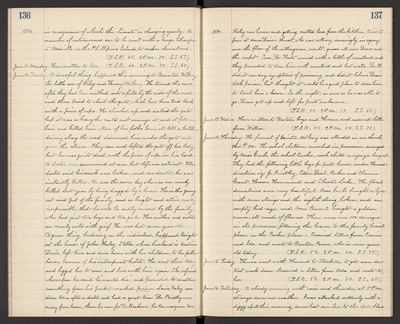 1894. in consequence of which the climate is changing yearly. A number of astronomies are to be sent with a large telescope to Manila on the Philippine Islands, to make observations. (T.S.R. 45. 2 P.M. 70. S.S. 57.)

June 12. Tuesday. A dreadful thing happened this morning to Quinton McGary the little son of Riley and Fanny McGary. He turned the cows, after they had been milked, into a field by the side of the road and then tried to shut the gate, which had been tied back with a piece of rope. He climbed up and untied the gate but it was so heavy he could not manage it, and it fell on him and killed him. None of his folks knew it, till a butcher, driving along the road discovered him under the gate and gave the alarm. they ran and lifted the gate off his body, but he was quite dead, with the piece of rope in his hand. A doctor was summoned at once, but life was extinct. The doctor said his neck was broken. and no doubt, he was instantly killed. He was the same boy who was no nearly killed last year by being dragged by a horse. He is the youngest and pet of the family, and so bright and active, really irrepressible, that he will be sadly missed by the family, who had just two boys and two girls. His mother and sisters are nearly wild with grief. He was but seven years old. A queen thing, bordering on the ridiculous, happened tonight at the house of John Haley. Stella, whose husband is Madison Drais, left him and came home with her children, to her father's house, because of his intemperate habits. He went there today and begged her to come and live with him again. She refused, whereupon he said he "would die," and proceeded to swallow something form his pocket, marked poison. Lewis Haley ran down town after a doctor and had a great time. Dr. Priestley was away from home, then he for Dr. Barbour. he too, was gone. Mr.

1894. Haley ran house, and getting melted lard from the kitchen, tried to pour it down Drais's throat, who was rolling, seemingly in agony, over the floor of the sitting room, result, grease all over Drais and the carpet. Soon, Dr. Foote arrived with a bottle of mustard, and they proceeded to dose him with mustard and hot water. Dr. F. didn't see any symptoms of a poisoning, and didn't believe Drais took poison, but thought it would be a good plan to dose him to teach him a lesson. In the night, as soon as he was able to go, Drais got up and left for parts unknown. (T.S.R. 44. 2 P.M. 77. S.S. 65.)

June 14. Thursday. The funeral of Quinton McGary was attended in our church this P.M. The school children marched in procession, arranged by Miss Grubs, the school teacher, each child carrying a bouquet. They had the following little boys for pall-bearers, under Howard's direction, viz! Jo Priestley, Eddie Dial, Parker and Clarence Grant, Horace Hammond and Chester Locke. The floral decorations were very beautiful. Miss Grubs brought a lyse with seven strings and the eighth string broken, and an empty bird-cage, and Mrs. Bruml brought a golden crown, all made of flowers. There were over 100 carriages in the procession, following the hearse to the family burial place, on the Parker place. - Received letters from Eunice and Ida, and wrote to Benton Pascoe, who is nine years old today. (T.S.R. 52. 2 P.M. 84. S.S. 75.)

June 16. Saturday. A cloudy morning with rain and thunder at 5 P.M. strange summer weather. I was attacked suddenly with a dizzy spell this morning, somewhat similar to the spell I had