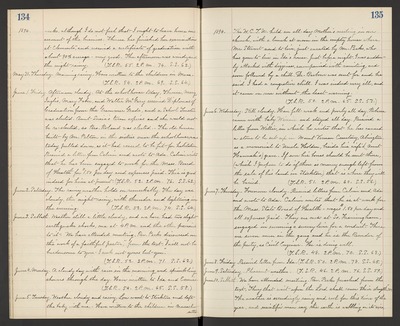 1894. weeks, although I do not feel that I ought to leave home on account of the business. Theresa has finished her examination at Clements, and received a certificate of graduation with about 90% average - very good. The afternoon was kindly and the night rainy. (T.S.R. 55. 2 P.M. 74. S.S. 62.)

June 1. Friday. Afternoon cloudy. At the school house today, Theresa, Mary Inglis, Mary Faber, and Walter McGary received Diplomas of Graduation from the Grammer Grade, and a School Trustee was elected. Aunt Susie's term expires and she would not be re-elected, so Bro. Roland was elected. The old house built by Mr. Pelton in the sixties near the school house, was today pulled down, as it had ceased to be fit for habitation. Received a letter from Calvin and wrote to Ada. Calvin writes that he has bun engaged to work for the Mass. Board of Health for $1.50 per day and expenses paid. This is good indeed for him at present. (T.S.R. 52. 2 P.M. 76. S.S.62.)

June 5. Tuesday. Weather cloudy and rainy. Lou went to Stockton and left the baby with me. Have written to the children in Massachusetts.

1894. The W.C.T.W. held an all - day Mother's meeting in our church, with a lunch at noon in the empty house where Mr. Stewart used to live, just vacated by Mr. Perks, who has gone to live in Ida's house. Just before night, I was suddenly attacked with dizziness, accompanied with vomiting, and soon followed by a chill. Dr. Barbour was sent for and he said I had a congestive chill. I was indeed very ill, and it came on me without the least warning. (T.S.R. 50. 2 P.M. 65. S.S. 53.)

June 6. Wednesday. Still cloudy. Have fell weak and poorly all day. Rebecca came with baby Winnie and stayed all day. Received a letter from Willie, in which he writes that he has caused a stone to be set up in Mount Vernon Cemetery, Abington, as a memorial to Uncle Holden, beside his wife's (Aunt Hannah's) grave. If ever his bones should be sent there, (which I propose to do if there is money enough left from the sale of his land in Stockton) that is where they will be buried.(T.S.R. 51. 2 P.M. 60. S.S. 56.)

June 7. Thursday. Forenoon cloudy. Received letters from Calvin and Ada and wrote to Ada. Calvin writes that he is at work for the Mass. State Board of Health - wages $1.50 per day and all expenses paid. They are now at Sr. Framingham, engaged in running a survey line for a conduit. There are seven men in the gang and he is the Recorder of the party, as Civil Engineer. He is doing well. (T.S.R. 48. 2 P.M. 70. S.S. 63.)

June 10. Sabbath. We have attended meeting. Rev. Perks preached from the text, "They that wait upon the Lord shall renew their strength", DC. The weather is exceedingly rainy and cool for this time of the year, and scientific men say the earth is wobbling on its axis,