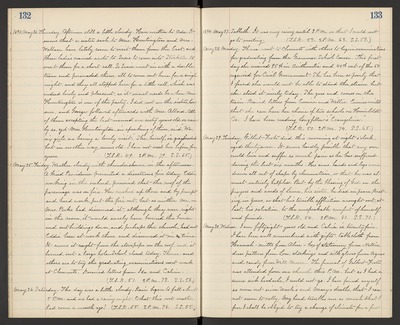 1894. May 24. Thursday. Afternoon still a little cloudy. Have written to Ada. It seems that a sister each to Mrs. Huntington and Mrs. Wallace have lately come to visit them from the East, and those ladies named wrote to Susie to come into Stockton to meet them for a short call. So Susie went in with a double team and persuaded them all to come out here for a single night, and they all stopped here for a little call, which was indeed lively and pleasant, as it must needs be when Mrs. Huntington is one of the party. I did not see the sisters, however, and George followed afterward with Mrs. Allard. All of them excepting the last named are sixty years old or nearly so, yet Mrs. Huntington, in speaking of them, said, "We, six girls, are having a lovely visit". She, herself, is grayheaded but in no other way, seems old. I have not met her before for years. (T.S.R. 49. 2 P.M. 79. S.S. 65.)

May 25. Friday. Weather cloudy with thundershower in the afternoon, A kind Providence prevented a disastrous fire today. Eddie, working in the orchard, perceived that the roof of the parsonage was on fire. He rushed up there and by prompt and hard work, put the fire out, but as neither Mr. or Mrs. Perks had discovered it, although they were right in the room, it would surely have burned the house and outbuildings down, and perhaps the church, had not Eddie been at work there and discovered it in time. It seems it caught from the stove pipe on the roof, and it burned out a large hole. School closed today. Theresa and others are to try the graduating examinations next week at Clements. Received letters from Ida and Calvin. (T.S.R. 51. 2 P.M. 73. S.S. 58.)

May 28. Monday. Theresa went to Clements with others to begin examinations for graduating from the Grammar School Course. This first day she received 95% in Arithmetic and 40% out of the 50 required for Civil Government. She has been so poorly that I feared she would not be able to stand the strain, but she stood it nicely today. She goes and comes on the train. Received letters from Eunice and Willie. Eunice writes that she can have her choice of two school in Humboldt Co. I have been reading Longfellow's "Evangeline". (T.S.R. 50. 2 P.M. 74. S.S. 65.)

May 29. Tuesday. Gilbert Foote died this morning at eight o'clock, aged thirty seven. It seems hardly possible that any one could live and suffer so much pain as he has suffered during the last six months. He's arms, hands and legs were drawn all out of shape by rheumatism, so that he was almost entirely helpless. But, by the blessing of God on the prayers and words of Laura, his sister, he died in peace, trusting in Jesus, so that his terrible affliction wrought out, atlast, his salvation, to the unspeakable comfort of himself and friends. (T.S.R. 54. 2 P.M. 81. S.S. 71.)

May 30. Wednes. I am fifty eight years old and Calvin is twentyfive. I have been well remembered with gifts - table cloth from Hannah - mitts from Alice - box of stationery from Nellie, dress pattern from Lou, stockings and silk gloves from Agnes and candy from Will Moore. The funeral of Gilbert Foote was attended from one church this P.M. but as I had a severe sick headache, I could not go. I have found myself so worn out since Uncle's and Mary's deaths, that I can not seem to rally. My head troubles me so much that I fear I shall be obliged to try a change of climate for a few