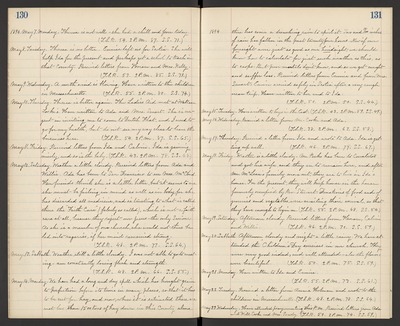 May 12. Saturday. Weather a little cloudy. Received letters from Ada and Willie. Ada has been to San Francisco to see Mrs. McCloud. Her friends think she is a little better, but it seems to me she must be failing in mind as well as in body, for she has discarded all medicine, and is trusting to what is called there the "Faith Cure" (falsely so called), which is not a faith cure at all, because they reject our Jesus - the only Saviour. As she is a member of our church, she would not thus be led into vagaries, if her mind remained strong. (T.S.R. 48. 2 P.M. 77. S.S. 64.)

May 14. Monday. We have had a long and dry spell which has brought grain to perfection before its time in many places, so that it has to be cut for hay, and now, when it is estimated there are not less than 1500 tons of hay down in the County alone,

1894 there has come a drenching rain to spoil it. Two and 17/100 inches of rain has fallen in the past twenty four hours. Now if our foresight were just as good as our hindsight, we should know how to calculate for just such weather as this, as to crops. But poor mortals don't know, and so we get caught and suffer loss. Received letters from Eunice and from Mrs. Smart. Eunice arrived safely in Scotia after a very rough ocean trip. Have written to her and to Ida. (T.S.R. 50. 2 P.M. 50. S.S. 44.)

May 18. Friday. Weather is a little cloudy. Mr. Perks has been to Corralitos and got his wife and they are to remain here, and, after Mr McLean's family move out, they are to live in Ida's house. For the present, they will keep house in the house formerly occupied by Rev. Stewart. Donations of food and of groceries and vegetables, were awaiting their arrival, so that they have enough to begin on. (T.S.R. 55. 2 P.M. 68. S.S. 54.)