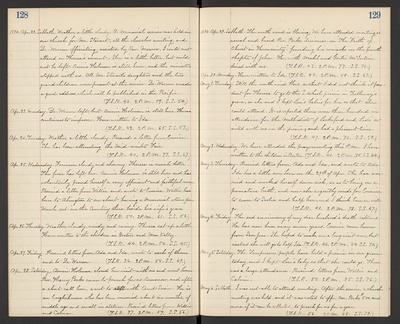 1894. Apr. 22.Sabbath. Weather a little cloudy. A memorial service was held in our church for Mr. Stewart, all the churches uniting, and Dr. Warren officiating, assisted by Rev. Meserve. I could not attend on Theresa's account. She is a little better, but could not be left. Annie Holman is still here, and the ministers stopped with us. All Mr. Stewart's daughters and the two grand children were present at the service. Dr. Warren made a good address, which will be published in the Pacific. (T.S.R. 48. 2 P.M. 59. S.S. 54.)

Apr. 25. Wednesday. Forenoon cloudy and showery. Theresa is much better. The fever has left her. Annie Holman is still here and has voluntarily proved herself a very efficient and faithful nurse. Received a letter from Willie and wrote to Eunice. Willie has been to Abington to see about having a Memorial stone for Uncle set in the Cemetery there beside his wife's grave (T.S.R. 50. 2 P.M. 61. S.S. 52.)

Apr. 28. Saturday. Annie Holman closed her visit with us and went home. Rev. Harry Perks came to preach for us tomorrow, and after a short call here, went to stall with Aunt Susie. He is an Englishman who has been married about six months, of middle age and small in stature. Received letters from Willie and Calvin. (T.S.R 37. 2 P.M. 59. S.S. 56.)

May 1. Tuesday. Still the north wind blows, so that I did not think it prudent for Theresa to go to the S. school picnic in Tretheway's grove, so she and I kept Lou's babies for her so that she could attend. It is reported there were three hundred in attendance, for the Methodists of Lockeford and Lodi united with us in the picnic and had a pleasant time. (T.S.R. 47. 2 P.M. 70. S.S. 59.)

May 3. Thursday. Received letters from Ada and Ida, and wrote to Ada. Ida has a little son born on the 29th of Apr. She has worried and worked herself down sick so as to bring on a premature birth, and now she urgently sends for Eunice to come to Scotia and help her, and I think Eunice will go. (T.S.R. 41. 2 P.M. 78. S.S. 67.)