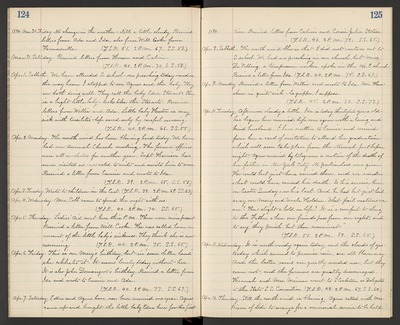 Apr. 1. Sabbath. We have attended S. school - no preaching today - and on the way home I stopped to see Agnes and the baby. They are both doing well. They call the baby Edna Stewart. She is a bright little baby - looks like the Stewarts. Received letters from Willie and Ada. Little baby Hester is very sick with tonsilitis - life saved only by careful nursing. (T.S.R. 40. 2 P.M. 66. S.S. 55.)

Apr. 2. Monday. The north wind has been blowing hard today. We have had our Annual Church meeting. The former officers were all re-elected for another year. Supt. Harrison has never visited us - we voted to write and invite him to come. Received a letter from Eunice and wrote to Ida. (T.S.R. 39. 2 P.M. 65. S.S. 58.)

Apr. 7. Saturday. Eddie and Agnes have now been married one year, Agnes came up and brought the little baby Edna here for the first

Apr. 10. Tuesday. Afternoon cloudy a little. Ida is today thirtytwo years old - has begun her married life over again with a loving and kind husband. I have written to Eunice and received from her a card of invitation to attend her graduation which will soon take place from the Normal. Just before night, Agnes received by telegram a notice of the death of her father in New York City. No particulars were given. He could but just have arrived there, and we wonder what could have caused his death. So his service here on Easter Sunday was his last. And he had but just laid away our Mary and Uncle Holden. What frail creatures we are! How slight a hold on life! It is a comfort of cling to the Father when our friends pass from our sight, and to say, "they perish, but thou remainest." (T.S.R. 51. 2 P.M. 83. S.S. 65.)

Apr. 11. Wednesday. It is north windy again today, and the clouds of yesterday which seemed to promise rain, are all blown away. And the latter rains are greatly needed now, but they come not, and the farmers are greatly discouraged. Hannah and Mrs. Minner went to Stockton as Delegates to the State S.S. Convention. (T.S.R. 42. 2 P.M. 67. S.S. 62.)

Apr. 12. Thursday. Still the north wind is blowing. Agnes called with Mrs. Rixon of Lodi to arrange for a memorial service to be held