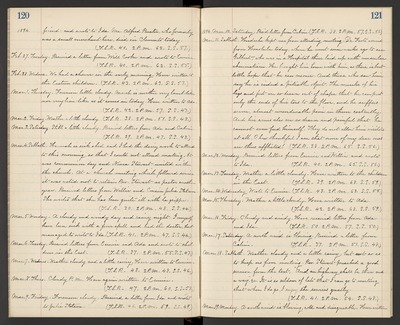 Mar. 4. Sabbath. Hannah is sick abed and I had the dairy work to attend to this morning, so that I could not attend meeting. It was communion day and Nema Stewart united with the church. At a church meeting which followed service it was voted not to retain Rev. Stewart as pastor another year. Received letters from Willie and Cousin Julia Stetson. She writes that she has been quite ill with la grippe. (T.S.R. 30. 2 P.M. 48. S.S. 44.)

Mar. 11. Sabbath. Headache kept me from attending meeting. Dr. Foote arrived from Honolulu today, where he went some weeks ago to see Gilbert, who was in a Hospital there laid up with muscular rheumatism. He brought him home with him, as there is but little hope that he can recover. And those who saw him say he is indeed a pitiable object. The muscles of his legs and feet are so drawn out of shape that he can put only the ends of his toes to the floor, and he suffers severe, almost unendurable pain in them costantly. And his arms also are so drawn and painful that he cannot even feed himself. They do not allow him visitors at all. O how thankful I am that none of my dear ones are thus afflicted! (T.S.R. 38. 2 P.M. 65. S.S. 56.)

Mar. 19. Monday. A north wind is blowing, cold and disagreeable. Have written