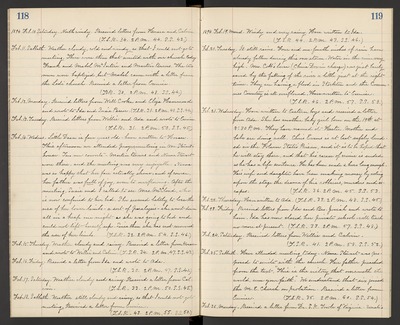 Feb. 11. Sabbath. Weather cloudy, cold and windy, so that I could not go to meeting. There were three that united with our church today. Frank and Mabel McIntire and Martin Burns. The two men were baptized, but Mabel came with a letter from the Lodi church. Received a letter from Eunice. (T.S.R. 30. 2 P.M. 48. SS. 44.)

Feb. 14. Wednes. Little Dean is four years old - have written to Horace. This afternoon we attended prayermeeting in Mr. Stewart's house. Two new converts - Martin Burns and Nema Stewart were there, and the meeting was very enjoyable. Nema was so happy that her face actually shone, and course, her father was full of joy, even to overflowing. After the meeting, Susie and I called to see Mrs. McCloud, who is now confined to her bed. She seemed lately to lose the use of her lower limbs - a sort of paralysis - she went down all in a heap one night as she was going to bed and could not lift herself up. Since then she has not recovered the use of her limbs. (T.S.R. 32. 2 P.M. 54. S.S. 46.)

Feb. 20.Tuesday. It still rains, Four and one-fourth inches of rain have already fallen during this one storm. Water in the river very high, Mrs. Cobb's lever (China Doc in charge) was just barely saved by the falling of the river a little just at the right time. They are having a flood in Stockton and the Cosumnes Country is all overflowed. Have written to Eunice. (T.S.R. 46. 2 P.M. 57. S.S. 53.)

Feb. 21. Wednesday. Have written to Eastern boys and received a letter from Ada. She has another baby girl born on the 19th at 8:30 P.M. They have named it Hester. Mother and babe are doing well. Chris Evans is at last safely landed in the Folsom State's Prison, and it is to be hoped that he will stay there, and that his career of crime is ended as he has a life sentence. He has been made a hero long enough. His wife and daughter have been making money by acting upon the stage the drama of his robberies, murders and escapes. (T.S.R. 36. 2 P.M. 45. S.S. 53.

Feb. 25. Sabbath. Have attended meeting today. Nema Stewart was proposed to unite with the church. Her father preached form the text, "This is the victory that overcometh the world, even your faith". We understand that six joined the M.E. Church on probation. Received a letter from Eunice. (T.S.R. 35. 2 P.M. 60. S.S. 54.)