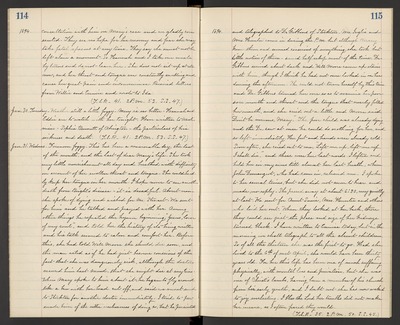 1894. Consultation with him on Mary's case and we gladly con sented. They see no hope for her recovery and fear she may take fatal spasms at any time. They say she must not be left alone a moment. So Hannah and I take our meals by turns and do not leave her. She does not sit up at all now, and her throat and tongue are constantly swelling, and cause her great pain and inconvenience. Received letters from Willie and Eunice and wrote to Ida. (T.S.R. 41. 2 P.M. 52. S.S. 47.)

Jan. 31. Wednes. Forenoon foggy. This has been a memorable day, the last of the month, and the last of dear Mary's life. She took very little nourishment all day and breathed with difficulty on account of her swollen throat and tongue. She could hardly keep her tongue in her mouth. I hope never to see another death from Bright's disease - it is dreadful. About noon she spoke of dying and wished for Mr. Stewart. We sent for him and he talked and prayed with her. Among other things he repeated the hymn beginning, "Jesus, loves of my soul", and told her the history of its being written and his talk seemed to calm and comfort her. Before this, she had told will Moore she should die soon, and the man acted as if he had just become conscious of the fact that she was dangerously sick, although the doctors assured him last Mond, that she might die at any time. When Mary spoke to him about it, he began to fly around like a hen with her head cut off, and said we must send to Stockton for another doctor immediately. I tried to persuade him of the utter uselessness of doing so, but he persisted

1894. and telegraphed to Dr. Gibbons of Stockton. Mrs. Inglis and Mrs. Hunter came in during the P.M. but although Mary knew them and seemed conscious of everything, she took but little notice of them - seemed half asleep most of the time. Dr. Gibbons arrived about dark and Will Moore came upstairs with him, thought I think he had not once looked in on her during the afternoon. She could not turn herself by this time and Dr. Gibbons turned her over so as to examine her poor sore mouth and throat and the tongue that nearly filled her mouth, and she cried out a little and Moore said "Don't be nervous, Mary." The poor child was already dying and the Dr. saw at once he could do nothing for her, and so left immediately. Her feet and hands were already cold. Soon after, she cried out to me, "Lift me up, lift me up, I shall die", and these were her last words. I lifted and held her in my arms till almost her last breath, when John Demangeot, who had come in, relieved me. I spoke to her several times, but she did not seem to hear and made no reply. She passed away at about 6:30, very quietly at last. We sent for Aunt Susie, Mrs. Hunter and others who laid her out. When they looked at her back, there they could see just the place and size of her kidneys turned black. I have written to Eunice today, but in the morning we shall telegraph to all the absent children. So of all the thirteen she was the first to go. Had she lived to the 6th of next April, she would have been thirty years old. For her this life has been one of much suffering physically, with mental loss and privation, but she was one of Christ's lambs, having been a member of his church from his early youth, and I doubt not she has now waked to joy everlasting. I bless the Lord her troubles did not make her insane, as I often feared they would. (T.S.R. 35. 2 P.M. 50. S.S. 45.)