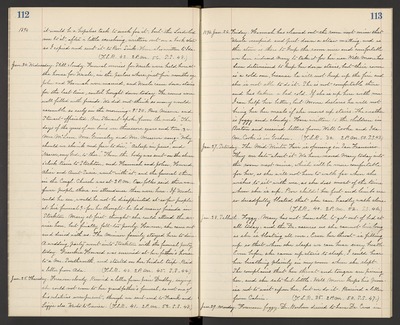 Jan. 24. Wednesday. Still cloudy. Funeral services for Uncle were held here at the house for Uncle, in the parlors where, just five months ago, John and Hannah were married, and Uncle came down stairs for the last time, until brought down today. The rooms were well filled with friends. We did not think so many would assemble so early in the morning - 9:30. Revs. Meserve and Stewart officiated. Mr. Stewart spoke from the words, "The days of the years of our lives are threescore years and ten", D.C. Mrs. McLean, Mrs. Grimsley and Mr. Meserve sang - "Why should we shrink and fear to die," "Asleep in Jesus", and "Nearer, my God, to thee." Then the body was sent on the eleven o'clock train to Stockton, and Hannah and John, Howard, Alice and Aunt Susie, went with it, and the funeral there in the Congl. Church was at 2 P.M. Our folks said there were fewer people there in attendance than were here. If Uncle could he see, would he not be disappointed at so few people at his funeral? - for he thought he had many friends in Stockton. Mary at first thought she could attend the service here, but finally felt too poorly. However, she came out and dined with us. The Minner family stayed here to dine. A wedding party went into Stockton with the funeral party today. Frankie Howard was married at her father's house to a Mr. Southworth, and started on her bridal trip. Rec'd a letter from Ada. (T.S.R. 40. 2 P.M. 45. S.S. 44.)

Jan. 25. Thursday. Forenoon cloudy. Received a letter from Josie Dudley, saying she could not come to her grandfather's funeral, so not one of his relatives were present, though we sent word to Frank and Lizzie also. Wrote to Eunice. (T.S.R. 41. 2 P.M. 52. S.S. 48.)

1894. Jan. 26. Friday. Hannah has cleaned out the room next mine that Uncle occupied and put down a straw matting, and as the stove is there to keep the room nice and comfortable we have induced Mary to take it for her use. Will Moore has been determined to keep her down stairs, but their room is a cold one, because he will not keep up the fire and she is not able to do it. She is not comfortable there and has taken a bad cold. If she is up here with me I can help her better, but Moore declares he will not bring her her meals if she moves upstairs. The weather is foggy and cloudy. Have written to the children in Boston and received letters from Will Cooke and Ida. Mr. Cooke is in Goshen. (T.S.R. 34. 2 P.M. 50. S.S. 43.)

Jan. 27. Saturday. The Mid - Winter Fair is opening in San Francisco. They are late about it. We have moved Mary today into the room next mine, which will be more comfortable for her, as she will not have to walk for when she wishes to sit with me, as she does most of the time when she is up. Poor child! her feet and limbs are so dreadfully bloated that she can hardly walk alone. (T.S.R. 40. 2 P.M. 52. S.S. 46.)

Jan. 28. Sabbath. Foggy. Mary has not been able to get out of bed at all today, and the Dr. Assures us she cannot live long as she is bloating all over. Even her throat is filling up so that when she sleeps we can hear every breath, Even before she came upstairs to sleep, I could hear her breathing plainly in my room when she slept. She complains that her throat and tongue are paining her, and she eats but little. Will Moore keeps his promise not to wait upon her, but we do it. Received a letter from Calvin. (T.S.R. 35. 2 P.M. 50. S.S. 47.)