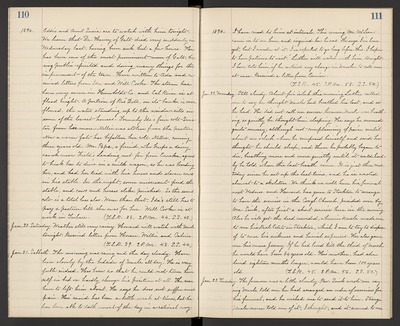 1894. Eddie and Aunt Susie are to watch with him tonight. We learn that Dr. Harvey of Galt died very suddenly on Wednesday last, having been sick but a few hours. He has been one of the most prominent men of Galt, being public - spirited and doing many things for the improvement of the town. Have written to Ada and received letters from Ida and Will Cooke. The storm has been very severe in Humboldt Co. and Eel River is at flood height. A portion of Rio Dell, on its banks, is over flowed, the water standing up to the window - sills in some of the lowest houses. Formerly Ida's fine colt Senator from his mare Nellie was stolen from the pasture. Now a worse fate has befallen her colt Nellie, coming three years old. Mr. Papa, a friend, who keeps a dairy ranch near Field's Landing not far firm Eureka, agreed to break her to drive in a milk wagon, so he was boarding her, and had her tied with his horses and eleven cows in his stable. In the night, some miscreant fired the stable, and cows and horses alike perished. So the second colt is a total loss also. Worse than that, Ida still has to pay a pasture bill she owes for her. Will Cooke is at work in Tulare. (T.S.R. 28. 2 P.M. 44. S.S. 42.)

Jan. 21. Sabbath. The morning was rainy and the day cloudy. Have been closely by the bedside of Uncle all day. He is very feeble indeed. Has been so that he could not turn him self in bed or hardly change his position at all. The men have to lift him about. He says he does not suffer much pain. His mind has been a little week at times, but he has been able to talk most of the day in a rational way.

Jan. 22. Monday. Still cloudy. About five o'clock this morning, Luther called me to say he thought Uncle had breathed his last, and so he had. He did not call me sooner, because Uncle was breathing so quietly he thought him sleeping. He says he seemed quite uneasy, although not complaining of pain, until about one o'clock, when he composed himself and said he thought he should sleep, and then he probably, began to die, breathing more and more quietly until it could hardly be told when the last breath came. It is just three mos. today since he sat up the last time, and he is wasted almost to a skeleton. We think we will have his funeral next Wednes. and Howard has gone to Stockton to arrange to have the services in the Congl. Church, presided over by Mr. Sink, after first a short service here in the morning. Also he will get the deed recorded, wherein Uncle made over to me his Real Estate in Stockton, which I am to try to dispose of to cover his sickness and burial expenses. He also gave me his mare Jenny. If he had lived till the third of March he would have been 84 years old. His Mother, had she lived eighteen months longer, would have been 100 years old. (T.S.R. 45. 2 P.M. 56. S.S. 50.)

Jan. 23. Tuesday. The forenoon was a little cloudy. Rev. Sink wrote me saying Uncle told me he had arranged an order of exercises for his funeral, and he wished me to send it to him. Strange Uncle never told me of it, I thought, and it seemed to me