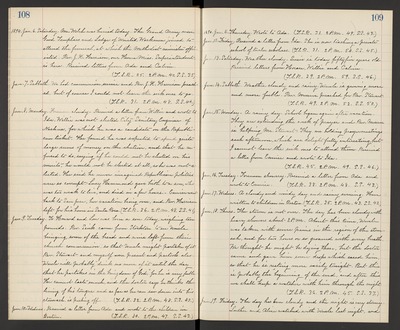 Jan. 8. Monday. Forenoon cloudy. Received a letter from Willie and wrote to Ida. Willie was not elected City Sanitary Engineer of Nashua, for which he was a candidate on the Republican ticket. He found he was expected to spend quite large seems of money on the election, and that he refused to do, saying if he could not be elected on his merits, he would not be elected at all, so he was not elected. He said he never imagined Republican politics were so corrupt. Lucy Hammond gave birth to a son, who was too weak to live, and died in a few hours. Eunice went back to San Jose, her vacation being over, and Rev. Harrison left for his home in Santa Rosa. (T.S.R. 36 2 P.M. 48. S.S. 41)

Jan. 9. Tuesday. To Howard and Low was born a son today, weighing ten pounds. Rev. Sink came from Stockton to see Uncle bringing some of the bread and wine left from their church communion, so that Uncle might partake of it. Rev. Stewart and myself were present and partook also. Uncle will probably "drink no more of it until the day that he partakes in the kingdom of God," for he is very feeble. He cannot taste much, and the doctor says he thinks the living of his tongue and as far as he can see down into his stomach, is peeling off. (T.S.R. 32. 2 P.M. 48. S.S. 43.)

Jan. 15. Monday. A rainy day. School began again after vacation. They are extending the week of prayer and Rev. Meserve is helping Mr. Stewart. They are holding prayermeetings each afternoon, which are delightfully interesting, but I cannot leave the sick ones to attend them. Received a letter from Eunice and wrote to Ida. (T.S.R. 45. 2 P.M. 49. S.S. 46.)

Jan. 18. Thurs. The storm is not over. The day has been cloudy with heavy showers about 2P.M. About this time, Uncle was taken with severe pains in the region of the stomach, and for two hours or so groaned with every breath. We thought he might be dying then, but the doctor came and gave him some drops which eased him, so that he is resting more easily tonight. But this is probably the "beginning of the end," and after this we shall keep a watcher with him through the night. (T.S.R. 36. 2 P.M. 45. S.S. 37.)

Jan. 19. Friday. The day has been cloudy and the night is very stormy. Luther and Alice watched with Uncle last night, and