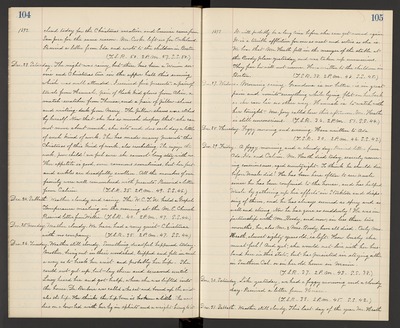 Dec. 23. Saturday. The night was rainy, but there has been a Union service and Christmas tree in the upper hall this evening, which was well attended. I received five presents. a pair of towels from Hannah, pair of black kid gloves from Alice, a match - scratcher from Theresa, and a pair of pillow-shams and writing-desk from Mary. The pillow-shams wore etched by herself. Now that she has so much dropsy that she can not move about much, she sits and does each day a little of such kind of work. She has made many presents this Christmas of this kind of work, also crocheting. She enjoys the work, poor child! we feel sure she cannot long stay with us. Her appetite is good, even ravenous sometimes, but her feet and ankles are dreadfully swollen. All the members of our family were well remembered with presents. Received a letter from Calvin. (T.S.R. 35. 2 P.M. 49. S.S. 46.)

Dec. 26. Tuesday. Weather still cloudy. Something dreadful happened today. Mother, being out in their woodshed, tripped and fell in such a way as to break her wrist and probably her hip. She could not get up, but lay there and screamed until Lucy heard her and got help, when she was lifted into the house. Dr. Barbour was called who set and bound up the wrist also the hips. He thinks the hip bone is broken a little. She now lies on a low bed with her leg in splints and a weight hung to it.

1893. It will probably be a long time before she can get around again. It is a terrible affliction for one so neat and active as she is. We hear that Mr. Heath fell in the manger of the stable at the Boody place yesterday and was taken up unconscious. They fear he will not recover. Have written to the children in Boston. (T.S.R. 38. 2 P.M. 48. S.S. 45.)

Dec. 27. Wednes. Morning rainy. Grandma is no better. is in great pain and vomits everything while lying flat on her back as she can lie no other way. Hannah is to watch with her tonight. Mrs Jory called her this afternoon. Mr. Heath is still unconscious. (T.S.R. 36. 2 P.M. 51. S.S. 44.)

Dec. 29. Friday. A foggy morning and cloudy day. Received letters from Ada, Ida and Calvin. Mr. Heath died today, scarcely recovering consciousness, aged seventyeight. To think he should die before Uncle did! He has been here often to see Uncle since he has been confined to the house, and has helped Uncle by gathering up his effects in Stockton and disposing of them, and he has always seemed so spry and so well and strong. Now he has gone so suddenly! He was in partnership with Mr. Boody, and now, in less than two months, he, also Mr. & Mrs. Boody, have all died. Only Mrs. Heath, almost eighty years old, is left. How lonely she must feel and yet, she would not live with her husband here in the state, but has persisted in staying either in Southern Cal. Or in her old home in Maine. (T.S.R. 37. 2 P.M. 43. S.S. 38.)