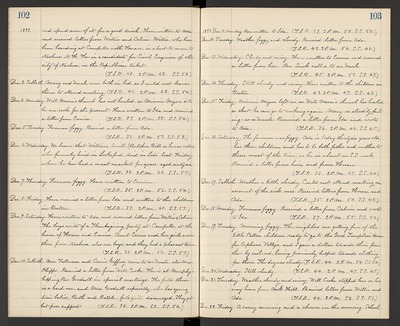 1893. and spend some of it for a good drink. Have written to Ada and received from Willie and Calvin. Willie, who has been boarding at Campello with Horace, is about to move to Nashua, N.H. He is a candidate for civil Engineer of the city of Nashua, on the Republican ticket. (T.S.R. 48. 2 P.M. 62. S.S. 58.)

Dec. 9. Saturday. Have written to Ada and received letters from Willie, Calvin. The boys write of a Thanksgiving party at Campello, at the house of Horace and Eunice. Aunt Carrie and her girls were there from Nashua, also our boys, and they had a pleasant time. (T.S.R. 38. 2 P.M. 62. S.S. 57.)

Dec. 10. Sabbath. Mrs. Tatterson and Carric Geffroy came to see Uncle, also Mrs. Phipps. Received a letter from Will Cooke. He is at Murphy's helping Rev. Goodsell in special meetings. The field there is a hard one, and Mrs. Goodsell especially, who has young twin babies, Ruth and Ralph, feels quite discouraged. they get but poor support. (T.S.R. 38. 2 P.M. 62. S.S. 54.)

Dec. 19. Tuesday. Morning foggy. The neighbors are getting five of the little Patton children ready to go to the Good Templar's Home for Orphans, Vallejo, and I gave a dollar towards their fare there by railroad, having previously helped towards clothing for them. The day was cloudy. (T.S.R. 44. 2 P.M. 54. S.S.50.)

Dec. 22. Friday. A rainy morning and a shower in the evening. School