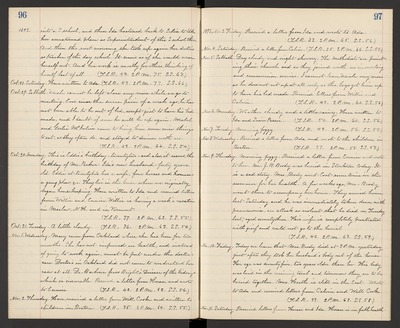 1893. into a S. school, and them Ida hastened back to Scotia to take her accustomed place as Superintendent of the S. school there. And then the next morning she took up again her duties as teacher of the day school. It seems as if she would wear herself out. And her work is mostly for others, thinking of herself last of all. (T.S.R. 42. 2 P.M. 75. S.S. 63.)

Oct. 29. Sabbath. Uncle cannot be left alone anymore while we go to meeting. Ever since the severe pain of a week ago, he has not been able to be out of bed, except just to have his bed made, and I doubt if ever he will be up again. Mabel and Gertie McIntire came to bring him some nice things to eat, as they often do, and stayed to dinner with us. (T.S.R. 43. 2 P.M. 64. S.S. 54.)

Oct. 30. Monday. This is Eddie's birthday - twentytwo - and also, it seems, the birthday of Mr. Parker - Ida's new husband - forty years old. Eddie and twentytwo has a wife, four horses and harnesses a gang plow, D.C. They live in the house where we originally began housekeeping. Have written to Ida and received letters from Willie and Eunice. Willie is having a week's vacation in Marlow, N.H. and in Vermont. (T.S.R. 37. 2 P.M. 62. S.S. 55.)

Nov. 1. Wednesday. Mary came from Oakland where she has been for two months. She has not improved in health, and instead of going to work again, must be put under the doctor's care. Doctor's in Oakland did not seem to understand her case at all. Dr. Barbour fears Bright's Disease of the kidneys. which is incurable. Received a letter from Horace and wrote to Eunice. (T.S.R. 42. 2 P.M. 62. S.S. 54.)

Nov. 5. Sabbath. Day cloudy and night showery. The Methodists are painting their church and so they joined with us in meeting and communion service. I cannot leave Uncle any more as he does not sit up at all only as the boys get him up to have his bed made. Received letters from Willie and Calvin. (T.S.R. 43. 2 P.M. 60. S.S. 56.)

Nov. 9. Thursday. Morning foggy. Received a letter from Eunice and wrote to her. Mr. J. B. Boody was buried in Stockton today. It is a sad story. Mrs. Boody went East sometime in the summer for her health. A few weeks ago. Mr. Boody went there to accompany her home. They arrived home last Saturday, and he was immediately taken down with pneumonia, an attack so violent that he died on Tuesday last, aged seventythree. He's wife is completely prostrated with grief and could not go to burial (T.S.R. 46. 2 P.M. 63. S.S. 59.)

Nov. 10. Friday. Today we learn that Mrs. Boody died at 3P.M. yesterday just after they took her husband's body out of the house. Her age was seventy five, two years older than he. His body was laid in the receiving tomb and tomorrow they are to be buried together. Mrs. Health is still in the East. Wrote to Ada and received letters from Calvin and Will Cooke. (T.S.R. 37. 2 P.M. 63. S.S. 58.)

Nov. 11. Saturday. Received letters from Horace and Ida. Horace is in feeble health.