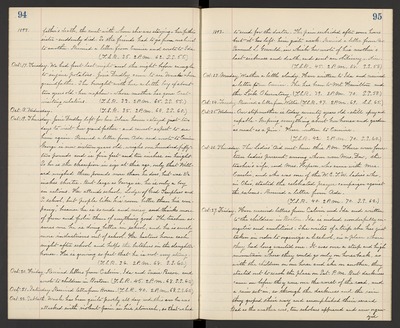 Oct. 17. Tuesday. We had frost last night and the night before enough to injure potatoes. Josie Dudley came to see Uncle - his grandfather. She brought with her a little boy of about two years old - her nephew - whose morther has gone East visiting relatives. (T.S.R. 33. 2 P.M. 65. S.S. 55.)

Oct. 19. Thursday. Josie Dudley left for her Selma home - stayed just two days to visit her grandfather - and cannot expect to see him again. Received a letter from Ada and wrote to Eunice. George is now sixteen years old, weighs one hundred fiftytwo pounds and is five feet and two inches in height. So he is the champion in size at this age, only the Willard weighed three pounds more than he does, but was 3 1/2 inches shorter. But large as George is, he is only a boy in actions. He attends school, Lodge and Good Templars and S. school, but people like his "room better than his company", because he is so rude and noisy and thinks more of fun and frolic than of anything good. The teacher assures me he is doing better in school, and he is surely more inductrious and out of school. He hastens home each night after school and helps the butchers in the slaughter. house. He is growing so fast that he is not very strong. (T.S.R. 36. 2 P.M. 68. S.S. 60.)

Oct. 22. Sabbath. Uncle has been quite poorly and all day and this eve he was attacked with violent pain in his stomach, so that we had

Oct. 26. Thursday. The Ladies' Aid met here this P.M. There were fourteen ladies present, among whom were Mrs. Dow, the teacher's wife, and Mrs. Hopson, who came with Mrs. Emslie, and who was one of the W.C.T.W. ladies who, in Ohio, started the celebrated prayer campaign against the saloons. Received a letter from Ada. (T.S.R. 40. 2 P.M. 70. S.S. 62.)

Oct. 27. Friday. Have received letters from Calvin and Ida and written to the children in Boston. Ida is indeed wonderfully energetic and ambitious. She writes of a trip she has just taken in order to organize a S, school, in a place where they had long wanted one. It was over a steep and high mountain where they could go only on horseback, so with the children on one horse and she on another, they started out to reach the place on Sat. P.M. But darkness came on before they were over the worst of the road, and a rain set in, so through the darkness and the rain they groped their way and accomplished their errand. Bad as the weather was, ten scholars appeared and were organized