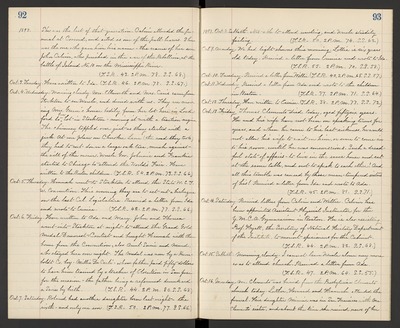 Oct. 4. Wednesday. Morning cloudy. Mrs. Ellsworth and Mrs. Cavis came from Stockton to see Uncle, and dined with us. They are moving Mrs. Green's house bodily from her lot here in Lockeford to her lot in Stockton - moving it with a traction engine. The chimney toppled over just as they started with a jerk. At one place on Cherokee Lane (the road they took) they had to cut down a large oak tree, much against the will of the owner. Uncle Geo. Johnnie and Frankie started to Chicago to attend the World's Fair. Have written to the Boston children. (T.S.R. 54. 2 P.M. 73. S.S. 66.)

Oct. 6. Friday. Have written to Ada and Mary. John and Theresa went into Stockton at night to attend the Grand Gold Medal-Demorest-Contest and brought Hannah with them home from the Convention, also Aunt Susie and Maud, who stayed here over night. The Medal was won by a Humboldt Co. boy - Millis De Carli - whose father paid fifty dollars to have him trained by a teacher of Education in San Jose for the occasion - the father bring a reformed drunkard. a Swiss by birth. (T.S.R. 44. 2 P.M. 80. S.S. 68.)

Oct. 13. Friday Thomas Clements died today, aged fiftysix years. He and his wife have not been on speaking terms for years, and when he came to his last sickness, he would not allow his wife to wait on him, or even to come in to his room, until he was unconscious. Such a dreadful state of affairs - to live in the same house and eat at the same table, and not to speak to each other! And all this trouble was caused by those mean-tempered sisters of his! Received a letter from Ida and wrote to Ada. (T.S.R. 45. 2 P.M. 81. S.S. 71.)

Oct. 14. Saturday. Received letters from Calvin and Willie. Calvin has been appointed Assistant Physical Instructor for the Y.M.C.A. Gymnasium in Boston. He is also assisting Prof. Hyatt, the Secretary of Natural History Department of the Institute, to mount specimens for the Cabinet. (T.S.R. 44. 2 P.M. 82. S.S. 68.)

Oct. 16. Monday. Mr. Clements was buried from the Presbyterian Clements church today. Luther, Howard and Hannah attended the funeral. His daughter Minnie was in San Francisco with Mr. Clements' sister, and about the time she received news of her