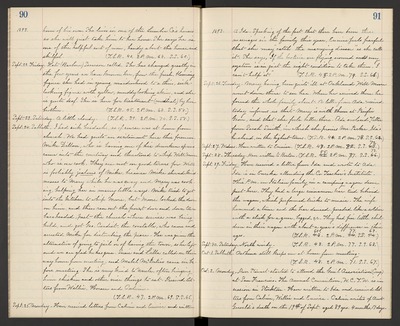 Sept. 22. Friday. Kate (Barbour) Severson called. She. has changed greatly in the few years we have known her, from the fresh, blooming figure she had in young maidenhood to a thin, sick-looking figure with yellow, muddy looking skin, and she is quite deaf. She is here for treatment (medical) by her brother. (T.S.R. 45. 2 P.M. 68. S.S. 58.)

Sept. 24. Sabbath. I had sick headache, so of course was at home from church. We had quite an excitement here this forenoon. Mike Dillon, who is having one of his drunken sprees came into the courtway and threatened to whip Will Moore who is our cook. They are not on good terms for Will is foolishly jealous of Mike, because Mike showed kindnesses to Mary while he was away and Mary was cooking, helping her in many little ways. Mike tried to get into the kitchen to whip Moore, but Moore locked the door on him, and then ran out the front door and down town bare headed, past the church where service was being held, and got Geo. Condict, the constable, who came and arrested Mike for disturbing the peace. He was given the alternative of going to jail or of leaving the town, so he left and we are glad he has gone. Susie and Lilla called on their way home from meeting, and Mabel McIntire came in before meeting. She is very kind to Uncle, often bringing him chicken and other nice things to eat. Received letters from Willie, Horace and Calvin. (T.S.R. 47. 2 P.M. 69. S.S.65.)

Sept. 25. Monday. Have received letters from Calvin and Eunice and written

1893. to Ida. Speaking of the fact that there have been tree marriages in the family this year, Eunice feels fearful that she may "catch the marrying disease" as she calls it. She says, "If the bacteria are flying around and my system is in just the right condition to take them. I cant help it". (T.S.R. 45. 2 P.M. 79. S.S. 66.)

Sept. 26. Tuesday. Mary having been quite ill at Oakland, Will Moore went down there to see her. When he arrived there he found the whole family absent. A letter from Ada received today informs us that Mary is with them at Pacific Grove, and that she feels better there. Ada enclosed a letter from Sarah Smith, in which she praises Mr. Parker, Ida's husband, in the highest terms. (T.S.R. 44. 2 P.M. 78. S.S. 64.)

Sept. 29. Friday. Have received a letter from Ida and wrote to Ada. Ida is in Eureka attending the Co. Teacher's Institute. This P.M. an Italian family in a camping wagon drove past here. They had a large cinnamon bear tied behind the wagon, which performed ticks to music. The wife hummed a tune and the bear danced, paraded like a soldier with a stick for a gun, begged, D.c. They had five little children in their wagon with about a year's difference in their ages. (T.S.R. 60. 2 P.M. 77. S.S. 63.)

Oct. 2. Monday. Rev. Stewart started to attend the Gen'l Association (Cong.) at San Francisco. The Annual Convention, W.C.T.W. is in session in Stockton. Have written to Ida and received letters from Calvin, Willie and Eunice. Calvin writes of Aunt Gerould's death on the 19th of Sept. aged 89 yrs. 4 months, 17 day.