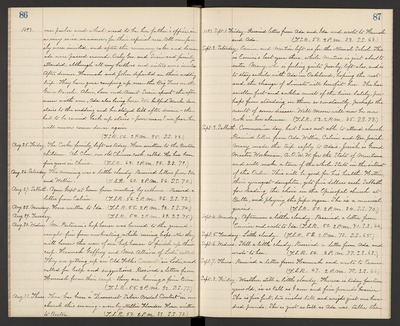 1893. our parlor and what used to be her father's office, in a very nice manner, for their especial use. All our family were invited, and after the ceremony cake and lemonade were passed around. Only Geo. and Susie and family attended, although all my brothers and sisters were invited. After dinner, Hannah and John departed on their wedding trip. They have gone camping up near the Big Trees on the Greve Ranch. Alice, Lou and Aunt Susie spent the afternoon with me, Ada also being here. We helped Uncle downstairs to the wedding and he stayed till after dinner - then had to be carried back up stairs - poor man! we fear he will never come down again (T.S.R.56. 2 P.M. 95. S.S. 82.)

Aug. 30. Wednes. Mr. Putnam's hop house was burned to the ground. caught fire from overheating while curing hops. Now they will borrow the use of our hop house to finish up their crop. Hannah Geffroy and Mrs. Allison of Lodi called. They are getting up an "Old Folk's Concert" in Lodi, and called for help and suggestions. Received a letter from Hannah from their camp - they are having a fine time. (T.S.R. 55. 2 P.M. 92. S.S. 77.)

Sept. 2. Saturday. Eunice and Mertice left us for the Normal School. This is Eunice's last year there, while Mertice is just about to enter. Mary, who is feeling quite poorly, left also, and is to stay awhile with Ada in Oakland, hoping the rest and the change of climate will benefit her. She has swollen feet and ankles most of the time lately, perhaps from standing on them so constantly, perhaps the result of some disease. Will Moore will now be our cook in her absence. (T.S.R. 52. 2 P.M. 85. S.S. 73.)

Sept. 3. Sabbath. Communion day, but I was not able to attend church. Received letters from Ada, Willie, Calvin and Bro. Josiah. Mary made the trip safely to Ada's. Josiah is Grand Master Workman, A.O.W.W. for the State of Montana and will make a tour of the whole State in the interest of the Order. This will be good for his health. Hattie, their youngest daughter, gets five dollars each Sabbath for leading the choir in the Episcopal church at Butte, and playing the pipe organ. She is a musical genius. (T.S.R. 50. 2 P.M. 84. S.S. 70.)

Sept. 9. Friday. Weather still a little cloudy. Theresa is today fourteen years old, is as tall as I am and five pounds heavier. She is five feet, two inches tall and weighs just one hundred pounds. She is just a tall as Ada was, taller than