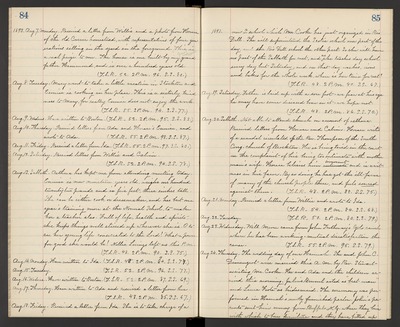 1893. Aug. 7. Monday. Received a letter from Willie and a photo from Horace of the old Carver homestead, with representatives of four generations sitting in the yard in the foreground. This is a real prize to me. The house is one built by my grand father Hammond, and is over a hundred years old. (T.S.R. 52. 2 P.M. 96. S.S. 80.)

Aug. 13. Sabbath. Asthma has kept me from attending meeting today. Eunice is now nineteen years old, weighs one hundred twenty two pounds and is five feet, three inches tall. She can be either cook or dressmaker, and has but one year's training more at the Normal School, to make her a teacher also. Full of life, health and spirits she keeps things well stirred up wherever she is. O to see her young life consecrated to the Lord! What a power for good she would be! Nellie Levings left us this P.M. (T.S.R. 48. 2 P.M. 90. S.S. 75.)

Aug. 18.Friday. Received a letter from Ida. She is to take charge of a

1893. new S. school which Ms. Cooke has just organized in Rio Dell. She will superintend the Scotia school one part of the day, and the Rio Dell school the other part. So she will have no part of the Sabbath for rest, and as she teaches day school every day but Saturday, and on that day washes, irons and bakes for the whole week, when is her time for rest? (T.S.R. 48. 2 P.M. 80. S.S. 67.)

Aug. 20. Sabbath. Not able to attend church on account of asthma. Received letters from Horace and Calvin. Horace writes of a scandal circulated the Rev. Thompson of the South Cong. church of Brockton. He is being tried in the court on the complaint of his being too intimate with another man's wife. Horace believes him innocent and is a witness in his favor. By so doing he has got the ill-favor of many of the church people there, and feels soured against them. (T.S.R. 48. 2 P.M. 88. S.S. 75.)

Aug. 24. Thursday. The wedding day of our Hannah. She and John C. Demangeot were married this A. M. by Rev. Stewart assisting Mr. Cooke. He and Ada and the children arrived this morning. Julius Bruml acted as "best man" and Laura Foote as brides maid. The ceremony was performed in Hannah's newly furnished parlor. John's parents sent him money from Buffalo, N.Y. where they live with which to buy furniture and they have fitted up