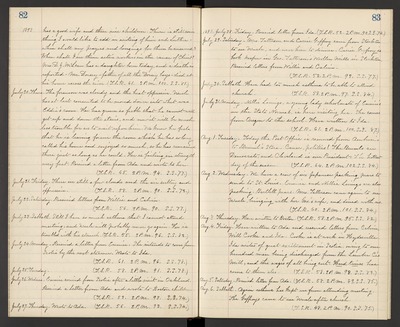 1893 has a good wife and three nice children. There is still something I would like to add in writing of him and Luther. when shall my prayers and longings for them be answered? When shall I see them active workers in the cause of Christ? Mrs. D.J. McLean has a daughter born today, and a death is reported - Mr. Dorsey - father of all the Dorsey boys - died at his home across the river. (T.S.R. 61. 2 P.M. 100. S.S. 81.)

July 20. Thurs. The forenoon was cloudy and the heat oppressive. Uncle has at last consented to be moved down into what was Eddie's room. He has grown so feeble that he cannot well get up and down the stairs, and now it will be much less trouble for us to wait upon him. We know he feels that he is leaving forever the room which he has so long called his home and enjoyed so much, so he has remained there just as long as he could. he is failing in strength very fast. Received a letter from Ada and wrote to her. (T.S.R. 65. 2 P.M. 94. S.S. 77.)

Aug. 4. Friday. Have written to Ada and received letter from Calvin, Will Cooke and Ida. Cooke is at work in Hydesville. Ida writes of great excitement in Scotia, owing to one hundred men being discharged from the Lumber Co's Mill, and the wages of all being cut. Hard times has come to them also. (T.S.R. 58. 2 P.M. 98. S.S. 83.)