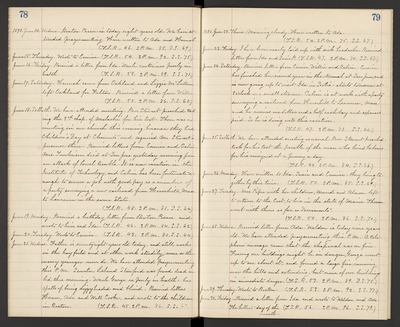 June 18. Sabbath. We have attended meeting. Rev. Stewart preached taking the 3rd Chap. of Malachi for his text. There was no meeting in our church this evening, because they had Children's Day at Clements and required Mr. Stewart's presence there. Received letters from Eunice and Calvin. Mrs. Tomlinson died at San Jose yesterday morning from an attack of bowel trouble. It is now vacation in the Institute of Technology, and Calvin has been fortunate enough to secure a job with good pay as a member of a party surveying a new railroad from Haverhill, Mass. to Laurence in the same State. (T.S.R. 48. 2 P.M. 81. S.S. 64.)

June 21. Wednes. Father is seventy eight years old today, and still works in the hay field and at other work steadily, more so than many younger men do. We have attended prayermeeting this P.M. Senator Leland Stanford was found dead in bed this morning. Uncle George is poorly in health - has spells of being dizzy headed and blind. Received letters Horace, Ada and will Cooke, and wrote to the children in Boston. (T.S.R. 45. 2 P.M. 86. S.S. 67.)

June 24. Saturday. Received letters from Eunice, Willie and Calvin. Eunice has finished her second year in the Normal at San Jose, and is now going up to visit Ida in Scotia - starts tomorrow at 8 o'clock on a small steamer. Calvin is at work with a party surveying a railroad from Haverhill to Lawrence, Mass. and he receives one dollar and a half each day and expenses paid. So he is doing well this vacation. (T.S.R. 47. 2 P.M. 83. S.S. 64.)

June 28. Wednes. Received letter from Ada. Weldon is today nine years old. We have attended prayermeeting this P.M. A telephone message came that the chaparral was on fire. Fearing our buildings might be in danger, George went up to see about it, and found a large fire running over the hills and extending, but none of our buildings in immediate danger. (T.S.R. 53. 2 P.M. 89. S.S. 75.)