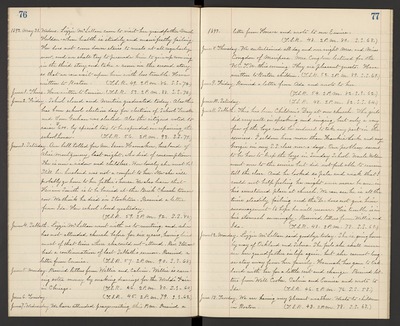 1893. May 31. Wednes. Lizzie McLellan came to visit her grandfather - Uncle Holden - whose health is steadily and manifestly failing. He does not come down stairs to meals at all regularly now, and we shall try to persuade him to give up rooming in the third story, and take a room in the second story, so that we can wait upon him with less trouble. Have written to Boston. (T.S.R. 49. 2 P.M. 86. S.S. 74.)

June 2. Friday. School closed and Mertice Graduated today. Also This has been school election day for election of school Trustee and Tom Geehan was elected. Also the citizens voted to raise $600. by special tax to be expended in repairing the school house. (T.S.R. 56. 2 P.M. 93. S.S. 79.)

June 3. Saturday. Our bell tolled for Mr. Isaac Hamaker, husband of Alice Montgomery, last night, who died of consumption. She is now a widow and childless. How lonely she must be! Still her husband was not a comfort to her. Now she will probably go home to her father's house. We also learn that Hiram Smith is to be buried at the Brick Church tomorrow. We think he died in Stockton. Received a letter from Ida. Her school closed yesterday. (T.S.R. 59. 2 P.M. 92. S.S. 80.)

June 4. Sabbath. Lizzie McLellan went with us to meeting, and she has not attended church before for six years, having lived most of that time where she could not attend. Rev. Stewart had a continuation of last Sabbath's sermon. Received a letter from Eunice. (T.S.R. 57. 2 P.M. 90. S.S. 68.)

June 7. Wednesday. We have attended prayermeeting this P.M. Received a

June 8. Thursday. We entertained all day and overnight Mrs. and Miss Congdon of Mariposa. Mrs. Congdon lectured for the W.C.T.W. this evening. They are pleasant guests. Have written to Boston children. (T.S.R. 52. 2 P.M. 89. S.S. 69.)

June 11. Sabbath. This has been Children's Day at our church. The girls did very well in speaking and singing, but only a very few of the boys could be induced to take any part in the exercises. I seldom have more that Frankie Locke and my Georgie in my S.S. class now-a-days. Our problem seems to be how to keep the boys in Sunday school. Uncle Holden went over to the service but did not feel able to remain till the close. And he looked so pale and weak that I could not help feeling he might never more be seen in his accustomed place at church. We can see he is all the time steadily failing and the Dr. does not give him encouragement to hope he will recover. His trouble is in his stomach seemingly. Received letter from Willie and Ida. (T.S.R. 48. 2 P.M. 78. S.S. 60.)

June 12. Monday. Lizzie McLellan said goodbye today. She is going home by way of Oakland and Selma. She feels she shall never see her grandfather in life again, but she cannot longer stay away from her family. Hannah has gone to Oakland with her for a little rest and change. Received Letters from Will Cooke, Calvin and Eunice and wrote to Ida. (T.S.R. 46. 2 P.M. 76. S.S. 58.)