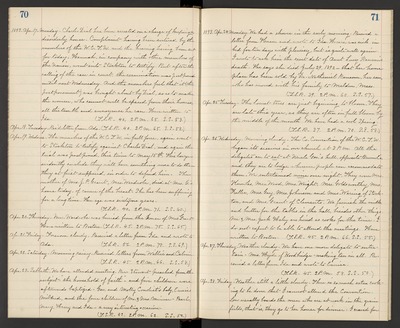 1893. Apr. 17. Monday. Charles Dial has been arrested on a charge of keeping a disorderly house. Complaint having been entered by the members of the W.C.T.W. and the hearing having been set for today, Hannah, in company with other members of the Union, went into Stockton to testify. But after the calling of the case in court, the examination was postponed until next Wednesday. And the members feel that it (the postponement) was brought about by Dial, so as to make the women, who cannot well be spared from their homes, all the trouble and annoyance he can. Have written to Ida. (T.S.R. 40. 2 P.M. 65. S.S. 53.)

Apr. 19. Wednes. The members of the W.C.T.W, in full force, again went to Stockton to testify against Charles Dial, and again the trial was postponed, this time to May 15th. His lawyers evidently conclude they will have something more to do than they at first supposed, in order to defend him. The mother of Mrs. J.P. Grant, Mrs. Wardrobe, died at Mrs. G.'s home today, of cancer of the breast. She has been suffering for a long time. Now age was sixtyone years. (T.S.R. 40. 2 P.M. 71. S.S. 60.)

Apr. 26. Wednesday. Morning cloudy - The Co. Convention of the W.C.T.W. began its sessions in our church at 3 P.M. All the delegates are to eat at Uncle Geo.'s hall, opposite Bruml's, and they are to lodge wherever people can accommodate them. We entertained nine over night. They were Mrs. Knowles, Mrs. Wood, Mrs. Wright, Mrs. Goldsworthy, Mrs. Fuller, Mrs. Gay, Mrs. Johnson and Mrs. Waring of Stockton, and Mrs. Grant of Clements. We furnish the milk and butter for the tables in the hall, besides other things. Mr. & Mrs. Jack Haley are hired as cooks for the time. I do not expect to be able to attend the meetings. Have written to Boston. (T.S.R. 45. 2 P.M. 66. S.S. 55.)

Apr. 28. Friday. Weather still a little cloudy. There is so much extra cooking to be done that I cannot attend the Convention. Lou usually boards the men who are at work in the grain fields, that is, they go to her house for dinner. I craved for