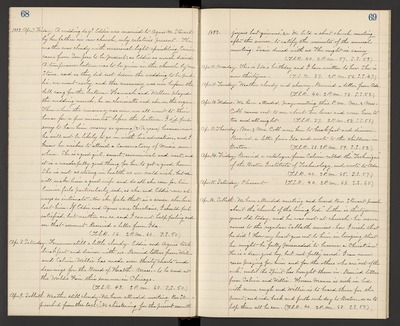 1893. Apr. 7. Friday. A Wedding day! Eddie was married to Agnes M. Stewart by her father in our church, only relatives present. The weather was cloudy with occasional light sprinkling. Eunice came from San Jose to be present, as Eddie so much desired. A temperance lecture was to be given in the church by Mrs. Stone, and as they did not desire the wedding to be public, we went early, and the ceremony was over before the bell rang for the lecture. Hannah and Wallace played the wedding march, he on clarionette and she on the organ. Then when the ceremony was over, we all went to their house for a few minutes before the lecture. I did feel sorry to have him marry so young (21 1/2 years) because now he will not be likely to go on with his education and I know he wishes to attend a conservatory of music somewhere. She is good girl, smart, economical and neat, and it is a wonderfully good thing for her to get a good home. She is not as strong in health as we could wish, but she will make him a good wife and do all she can for him Eunice feels particularly sad, as she and Eddie-were always so intimate. Now she feels, that, in a sense, she has lost him. If Eddie and Agnes were Christians, I should feel satisfied, but neither are so, and I cannot help feeling sad on that account Received a letter from Ida. (T.S.R. 36. 2 P.M. 60. S.S. 50.)

Apr. 8. Saturday. Forenoon still a little cloudy. Eddie and Agnes took breakfast and dinner with us. Received letters from Willie and Calvin. Willie has made over thirty charts and drawings for the Board of Health. Mass, - to be used at the World's Fair this summer in Chicago. (T.S.R. 43. 2 P.M. 60. S.S. 50.)

Apr. 9. Sabbath. Weather still cloudy. We have attended meeting. Rev, Stewart preached from the text, "No chastening for the present seemeth

Apr. 16. Sabbath - We have attended meeting and heard Rev. Stewart preach about the "church of the living God." Luther is thirtyseven years old today, and he was not at church - he never comes to the regular Sabbath services - how I wish that he did! How my heart goes out to him in longing that he might be "fully persuaded" to become a Christian! He is a dear, good boy, but not fully "saved", I can never cease praying for him and for the others who are "out of the ark", until the spirit has brought them in. Received letters from Calvin and Willie. Horace Mann is sick in bed with severe cough and Willie is to board there for the present, outside back and forth each day to Boston, so as to help them all he can. (T.S.R. 40. 2 P.M. 68. S.S. 59.)