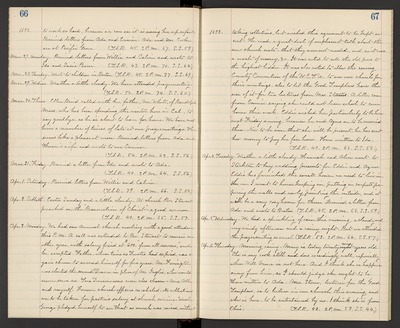 Mar. 30. Thurs. Ellen Baird called with her father, Mr. White of Randolph Mass. who has been spending the winter here in Cal., to say goodbye, as he is about to leave for home. We have met him a number of times of late at our prayermeetings. He seems like a pleasant man. Received letters from Ada and Horace's wife and wrote to out Eunice. (T.S.R. 54. 2 P.M. 62. S.S. 56.)

Apr. 3. Monday. We had our Annual church meeting with a good attendance this P.M. A call was extended to Rev. Stewart to remain another year, with salary fixed at $600. "from all sources", and he accepted. Father, whose time as Trustee had expired, was a. gain chosen to succeed himself for five years. Mr. Farrington was elected the second Deacon, in place of Mr. Inglis, who would never serve us. Two Deaconnesses were also chosen - Mrs. Allen and myself. Former church officers re- elected. No collections are to be taken for pastor's salary at church services. Uncle George pledged himself to see that as much was raised without

1893. taking collections, but wished this agreement to be kept secret. He made a great deal of unpleasant talk about the new church seats - that they were not needed, and so it was a waste of money, D.C. It was voted to sell the old pews to the highest bidder. It was also voted to allow the coming County Convention of the W.C.T.u. to use our church for their meetings, also to let the Good Templars have the use of it for two lectures from Mrs. Stone. A letter came from Eunice saying she could not leave school to come home this week. Eddie wished her particularly to be here next Friday evening, because he and Agnes are to be married then. Now to be sure that she will present, he has sent her money to pay her fare home. Have written to Ida. (T.S.R. 40. 2 P.M. 68. S.S. 58.)

Apr. 4. Tuesday. Weather a little cloudy. Hannah and Alice went to Stockton to buy wedding presents for Eddie and Agnes. Eddie has furnished the small house we used to live in, the one I went to housekeeping in, putting in carpets papering the walls and newly painting the outside, and it will be a very cosy home for them Received a letter from Ada and wrote to Boston. (T.S.R. 45. 2 P.M. 68. S.S. 59.)

Apr. 6. Thursday. Morning rainy. Mary is today twenty nine years old. She is my cook still and does exceedingly well, especially when will Moore is not here. And I think she is happier away from him, as I should judge she ought to be. Have written to Ada. Mrs. Stone, lecturer for the Good Templars, is to lecture in our church this evening, and she is here, to the entertained by us. I think she is from OhiO. (T.S.R. 42. 2 P.M. 53. S.S. 44.)