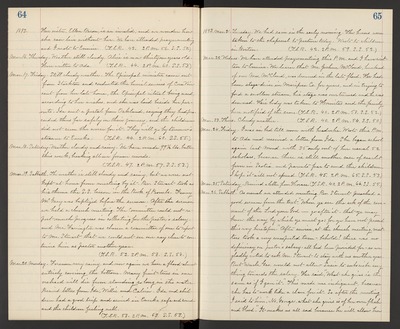 Mar. 17. Friday. Still cloudy weather. The Episcopal minister came out from Stockton and conducted the burial services of Cora Vincent from her late home, the Episcopal ritual being used, according to her wishes, and she was laid beside her parents. Ida sent a postal from Oakland, saying they had proceeded thus far safely on their journey, and the children did not seem the worse for it. They will go by tomorrow's steamer to Eureka. (T.S.R. 44. 2P.M. 60. S.S. 55.)

Mar. 19. Sabbath. The weather is still cloudy and rainy, but we were not kept at home from meeting by it. Rev. Stewart took as his theme the S.S. lesson in the Book of Proverbs. Fanny McGary was baptized before the sermon. After the sermon we held a church meeting. The Committee could not report much progress in collecting for the pastor's salary, and Mr. Farrington was chosen a committee of one to report to Mr. Stewart that we could not see our way clear to continue him as pastor another year. (T.S.R. 52. 2 P.M. 58. S.S. 58.)

Mar. 20 .Monday. Forenoon very rainy, and now again we have a flood - almost entirely covering the bottom. Many fruit-trees in our orchard will die from standing so long in the water. Received letter from Ida, Willie and Calvin. Ida and children had a good trip and arrived in Eureka safe and sound and the children feeling well. (T.S.R. 53. 2 P.M. 63. S.S. 53.)

Mar. 22. Wednes. We have attended prayermeeting this P.M. and I have written to Eunice. We learn that Mr. Joshua McCloud, husband of our Mrs. McCloud, was drowned in the late flood. He had been stage-driver in Mariposa Co. for years, and in trying to ford a swollen stream, his stage was overturned and he was drowned. His body was taken to Hornitas and the family here notified of the same. (T.S.R. 40. 2 P.M. 58. S.S. 52.)

Mar. 24. Friday. I was in bed till noon with headache. Wrote this P.M. to Ada and received a letter from Ida. She began school again last mond. with 35 only out of her usual 52 scholars, because there is still another case of scarlet fever in Scotia. and parents fear to send the children. I hope it will not spread. (T.S.R. 45. 2 P.M. 65. S.S. 53.)

Mar. 26. Sabbath. As usual we attended meeting. Rev. Stewart preached a good sermon from the text, "When ye see the ark of the covenant of the Lord your God - go after it- that ye may know the way by which ye must go; for ye have not passed this way heretofore." After service, at the church meeting, matters took a very unexpected turn - behold! there was no deficiency on pastor's salary - all had been provided for - so we gladly voted to ask Mr. Stewart to stay with us another year. But Uncle Geo. would not allow Susie to subscribe anything towards the salary. He said, "What she gives is the same as if I gave it." This made me indignant, because she has to work like a slave for it. So after the meeting I said to him, "No, George, what she gives is of her own flesh and blood." It makes us all sad because he will allow her