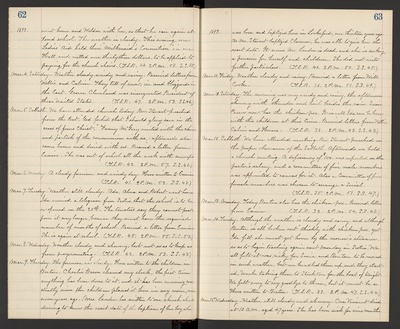 1893. went home and Weldon with her, as that he can again attend school. The weather is cloudy. This evening, our Ladies' Aid held their "milkmaid's Convention" in our Hall, and netted over thirty three dollars, to be applied to paying for the church chairs. (T.S.R. 44. 2 P.M. 58. S.S. 55.)

Mar. 4. Saturday. Weather cloudy, windy and rainy. Received letters from Willie and Calvin. They tell of snow, ice and blizzards in the East. Grover Cleveland was inaugurated President of these United States. (T.S.R. 47. 2 P.M. 53. S.S. 46.)

Mar. 5. Sabbath. We have attended church today Rev. Stewart preached from the text, "God forbid that I should glory save in the cross of Jesus Christ." Fanny McGary united with the church and partook of the communion with us, - afterward she came home and dined with us. Received a letter from Eunice. She was out of school all the week with mumps. (T.S.R. 42. 2 P.M. 57. S.S. 48.)

Mar. 7. Tuesday. Weather still cloudy. Ada, Alma and Robert went home. Ida received a telegram from Scotia that the school is to be re-opened on the 20th. The trustees say they cannot postpone it any longer, because they must have the required number of months of school. Received a letter from Eunice. She is again at school. (T.S.R. 45. 2 P.M. 55. S.S. 53.)

Mar. 9. Thursday. The forenoon was cloudy. Have written to the children in Boston. Charlie Bacon cleaned my clock, the first time anything has been done to it, and it has been running constantly since the children placed it here in my room, over seven years ago. Mrs. Lander has written to our church clerk desiring to know the exact date of the baptism of her boy, who

1893. was born and baptized here in Lockerford, over thirteen years ago. As Mr. Stewart baptized Clarence. he was able to give her the exact date. It seems Mr. Lander is dead, and she is seeking a pension for herself and children. She did not write farther particulars. (T.S.R. 40. 2 P.M. 50. S.S. 45.)

March 11. Saturday. The morning was very windy and rainy, the afternoon showery with thunder and hail besides the rain. Susie Pascoe now has the chicken fox. It is well Ida can be here with the children at this time. Received letter from Willie, Calvin and Horace. (T.S.R. 38. 2 P.M. 43. S.S. 43.)

March 12. Sabbath. We have attended meeting. Rev. Stewart preached on the people observance of the Sabbath. Afterwards we held a church meeting. A deficiency of $100. was reported on the pastor's salary, and a committee of five male members was appointed to canvas for it. Also a Committee of five female members was chosen to arrange a Social. (T.S.R. 35. 2 P.M. 51. S.S. 47.)

March 14. Tuesday. Although the weather is cloudy and rainy, and although Benton is all "broken out" thickly, with chicken fox, yet Ida felt she must get home by the morrow's steamer, so as to begin teaching again next Monday in Scotia. We all felt it was risky for Susie and Benton to be moved in such weather, but we bundled them up, and they started Uncle taking them to Stockton for the boat of tonight. We felt sorry to say goodbye to steam, but it must be so. Have written to Boston. (T.S.R. 38. 2 P.M. 47. S.S. 44.)

March 15. Wednesday. Weather still cloudy and showery. Corn Vincent died at 10 am. aged 47 years. She has been sick for nine months.