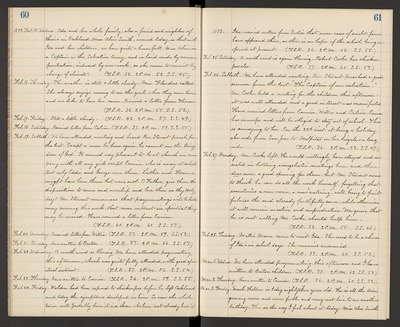 1893. Feb. 15. Wednes. Ada and her whole family, also a friend and neighbor of theirs in Oakland, Miss Alice Smith, arrived today, so that with Ida and her children, we have quite a house full. Miss Alice is a Captain in the Salvation Army, and is laid aside by nervous prostration, induced by over-work, so she comes to recruit by change of climate. (T.S.R. 32. 2 P.M. 52. S.S. 45.)

Feb. 19. Sabbath. We have attended meeting and heard Rev. Stewart preach from the text, "Except a man be born again. he cannot see the kingdom of God." It seemed very pleasant to be at church in company with all my girls except Eunice, who is away to school. But only Eddie and George were there. Luther and Howard might have been there but were not. O Father, give them the disposition to come and worship and love thee on thy Holy day! Mr. Stewart announces that prayermeeting will be held every evening this week, that more interest in spiritual things may be revived. Have received a letter from Eunice. (T.S.R. 40. 2 P.M. 60. S.S. 57.)

Feb. 24. Friday. Weldon had been exposed to chickenpox before he left Oakland and today the symptoms developed in him. So now the whole town will probably have it, D.C. those who have not already had it.

Feb. 26. Sabbath. We have attended meeting. Rev. Stewart preached a good sermon from the text- "The Captain of our salvation." Mr. Cooke held a meeting for the children this afternoon - it was well attended and a good interest was manifested. Have received letters from Eunice, Willie and Calvin. Eunice has mumps and will be obliged to stay out of school. This is annoying to her. On the 22d inst. it being a holiday, she rode from San Jose to Milpitas on her bicycle - a long ride. (T.S.R. 36. 2 P.M. 52. S.S. 47.)

Feb. 27. Monday. Mr. Cooke left. He would willingly have stayed and assisted in holding evenelistic meetings here, and there does seem a good opening for them, but Mr. Stewart seems to think he can do all the work himself, forgetting that sometimes a new voice, a new "watering", will bring to fruitfulness the seed already faithfully sown, while otherwise it will remain in active and unproductive. we grieve that he is not willing Mr. Cooke should help him. (T.S.R. 32. 2 P.M. 55. S.S. 48.)

Mar. 3. Friday. Uncle Holden is today eightythree years old. He is all the time growing more and more feeble and may not live to see another birthday. This is the way I feel about it today. Miss Alice Smith